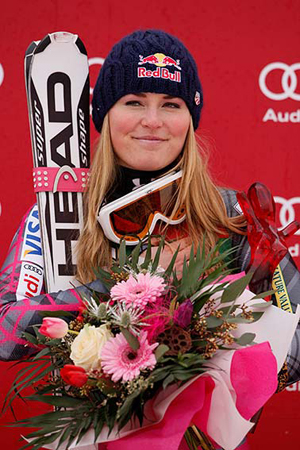 LENZERHEIDE, Switzerland –The saying “What goes around, comes around”, proved to be true today for Lindsey Vonn. After losing the Overall title two years ago in Lenzerheide to Maria Hoefl-Riesch by a mere three points after a cancelled race, due to today’s cancellation of the Downhill race Vonn became the proud owner of her sixth Downhill title, finishing the season one point ahead of Tina Maze.

Going into the Finals injured Lindsey Vonn was leading the Downhill standings. Since November the American won three Downhill races including her record 12th and 13th (sixth straight) victories in Lake Louse and a win in Cortina. Despite crashing out of the Val d’Isere DH, finishing sixth in St. Anton and missing both the Meribel and Garmisch Downhills after getting injured at the Schladming World Championships Super G, going into the finals she had 340 points, just one point more than Tina Maze. She was also 68 points ahead of Maria Hoefl-Riesch who was in third, and 96 points ahead of teammate Stacy Cook so any of these ladies could have been a contender for the globe.

As Maze had been keeping her impressive streak of results, rarely failing to land on the podium in any discipline, it seemed highly unlikely that she could miss that one point and not win the Downhill title. But the weather gods were not on Maze’s side today. A tick cloud of fog placed itself on the bottom section of the racecourse, forcing the jury to cancel the race after multiple postponements.

As there is no rescheduling of cancelled races at the Finals, today’s cancellation meant that even though not on the start list, Vonn won her record sixth straight Audi FIS Alpine World Cup downhill title.

The American set a new record as legendary skier Annamarie Moser-Proell has five straight DH titles (1971-75) for a total collection of seven globes in the discipline. With this globe Vonn surpassed Moser-Proell in the count of the total World Cup globes as the Austrian collected 16 during her career. Vonn is now the proud owner of 17 globes, only two short of Ingermar Stenmark who holds the record number of 19.