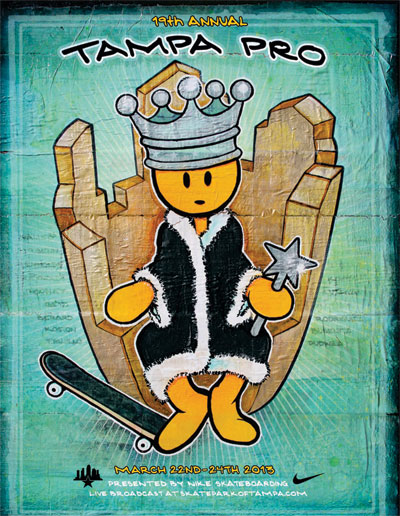 This year marks the 20th anniversary of SPoT and the 19th annual Tampa Pro. As far as contests go this one is the real deal. Running nearly two decades, it's the skate world equivalent of spring break: Florida, mayhem, humiliation and glory. It's a time to skate with friends you haven't seen all winter and get ready to kick off another year of skateboarding.

A live broadcast starts on Friday, March 22 at 6 pm EST and will be shown at http://skateparkoftampa.com/tampapro

Sunday, March 24
LIVE BROADCAST AT 11am EST at skateparkoftampa.com
Doors open at 9am and Semi-Finals start at 12pm with Top 10 advance to Finals (beginning immediately after the semis) to join Golden Ticket holders from Pro Qualifiers.