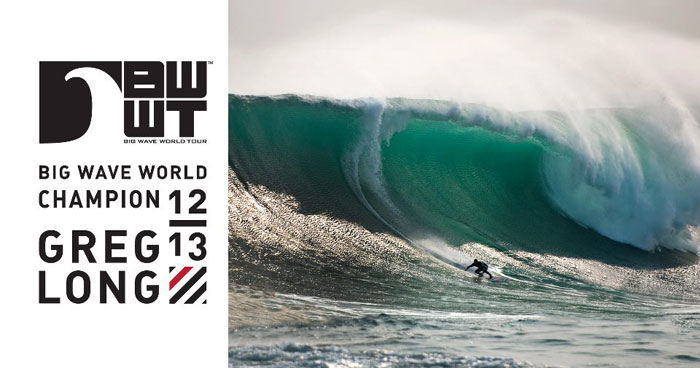 When Long arrived in Peru this past summer it was clear by the look in his eyes that he was there to win it all.  Greg would take his dedication, focus and training and make every final of the 2012/2013 season.  His consistency throughout the year was nothing short of spectacular.

Greg placed 2nd at the Billabong Pico Alto event in Peru, 3rd place at the Mavericks Invitation in Half Moon Bay, California and a 2nd place finish at the Nelscott Reef Big Wave Classic in Lincoln City, Oregon.  By the end of the season, Greg would finish nearly 1000pts ahead of his fellow competitors.

The “Crowing of the Champion” party was held at the Surfing Heritage Foundation Museum in San Clemente, Ca.  In attendance were competitors, staff, family, friends and industry executives exchanging stories of the season’s best moments while enjoying great food and drink.

Peter Mel, reigning BWWT Champion, called in via tele conference while traveling through Costa Rica to congratulate Greg on his newly acquired Title.  “It is my honor to pass the torch to another great young man, Mr. Greg Long.” stated Peter Mel.

In special attendance this year was Dr. Paskowitz. Dr. Paskowitz gave a heart-felt speech to Greg congratulating him on his Title and his incredible accomplishments.  “Your in a different league… Your not like us normal folks.”  “You got the message from the waves themselves. You big wave surfers are the only ones who have the ability to change the world” said Dr. Paskowitz.

Quiksilver Ceremonial, Punta de Lobos, Chile did not run this year due to a lack of big waves.

Billabong Pico Alto - The first stop on tour this season was the Billabong Pico Alto 2012.  The event ran on August 14th in the small coastal community of Punta Hermosa, Peru.  Surfers were greeted to waves exceeding the 30+ft mark with conditions improving throughout the day.  The waves at Pico Alto demonstrated their raw power early as Ken “Skindog” Collins suffered a severely broken nose and Rafael Velarde suffered a deep laceration on his face in Round 1.  The Final saw the biggest and most consistent surf of the day with waves reaching 40ft.  In the end, it was Carlos Burle edging out Greg Long for the victory.

Mavericks Invitation- 2nd stop on the BWWT ran on January 20th, 2013. Although the waves were not as big as they could have been, they did meet the wave height criteria of the Big Wave World Tour and the conditions allowed for a spectacular display of technical big wave surfing. The seldom ridden lefts at Mavericks became the showstopper with some of the highest scores of the event rewarded to those who took advantage of its scoring potential.  It was 2011/2012 BWWT Champion, Peter Mel, who earned his first Mavericks victory with Zach Wormhoudt and Greg Long finishing 2nd and 3rd.

Arnette Punta Galea Challenge – The first ever qualifying event in Tour history ran on January 28th, 2013.  The day was filled with tense moments, heavy wipe-outs and incredible rides.  During the event one of the water safety’s jet skis lost power and found its way to the inside rocks below the fabled cliffs of Punta Galea.  No one was hurt and due to the professionalism of the water safety crew and the surfers competing the incident was just another jaw-dropping moment in competitive big wave surfing.  By the end of the day it was 17-year-old charger, Naxto Gonzalez, who took the victory and obtained a BWWT Wildcard spot in the next BWWT Southern Hemisphere Event (Chile or Peru) and will become the youngest big wave surfer to participate in a BWWT Main Event.

Nelscott Reef Big Wave Classic – 3rd stop on the Tour ran February 4th, 2013.  The frigid deep-water outer reef saw waves in the 25-30ft range in perfect conditions with the best big wave surfers in the world displaying their modern approach to big wave surfing.  The display of big wave surfing at Nelscott Reef was incredible and the judges were handing out excellent scores throughout the day.  In the end it was Jamie Sterling taking the victory while Mr. Long once again took 2nd place.

The final stop on the tour, the Todos Santos Especial was not held to a lack of quality big waves.

The Big Wave World Tour is already in preparation for the next season. The Quiksilver Ceremonial, Punta de Lobos holding period begins April 15th and will run through June 15th, 2013.  In addition to the current event stops, Punta Galea will now become a Main Event, adding a top European location to the schedule.