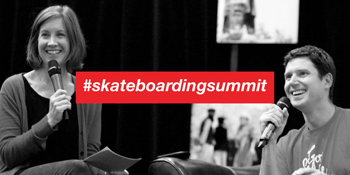 Rancho Santa Margarita, Calif., (April 2013) – The International Association of Skateboard Companies (IASC) is excited to announce its guest speaker lineup for the 2013 IASC Skateboarding Summit on May 8 through May 10, which will be held at the Sheraton Park Hotel in Anaheim, Calif. Registration is open now and $100 Early Bird Discounts expire on April 5th.

The IASC Skateboarding Summit is a three-day event that gives the leaders in skateboarding a chance to come together in a non-competitive atmosphere to educate themselves on topics meant to broaden their perspectives, connect them with their peers, and to inspire and further their business.

This year IASC is proud to host guest speakers:

“The depth of experience and variety of viewpoints from our speakers this year will give everyone who attends some great food for thought, I can’t wait to hear what these guys have to say!” –Josh Friedberg, Executive Director, International Association of Skateboard Companies.

The Skateboarding Hall of Fame and Icon Awards ceremony will be held the second night of the Summit on May 9th.  The awards ceremony honors the skateboarders, industry pioneers and cultural icons who have left a permanent imprint on the history of skateboarding and our culture. The 2013 inductees include: Woody Woodward (1960s), Tom Sims (1970s, Era One), Alan “Ollie” Gelfand (1970s, Era Two), Rodney Mullen (1980s, Era One), Christian Hosoi (1980s, Era Two), and two women – Wendy Bearer Bull (1960s) and Laura Thornhill Caswell (1970s). This year’s Icon Award recipients are pioneering skateboard photographer Warren Bolster, who revived Skateboarder Magazine in the 1970s; NHS and the crew who built it into what it is today – Richard Novak, Jay Shuirman, Bob Denike, Tim Piumarta and Jeff Kendall – and Devo, a band with the non-conformist attitude that has been inspiring skateboarders since the 1970s.

The night will include a Happy Hour, VIP meet-and-greet, VIP dinner and Awards Ceremony. All proceeds benefit the not-for-profit efforts of the Skateboarding Hall of Fame and the Go Skateboarding Foundation’s Just One Board initiative. All Summit attendees are guaranteed entrance to the Hall of Fame Awards ceremony which sold out last year with 400 attendees.

Make sure to catch the Vans Pool Party Contest at the Vans Skatepark located three miles from the Summit location on Saturday, May 11th.