Washington, DC -- SnowSports Industries America (SIA) and Leisure Trends Group have released SIA RetailTRAK™ numbers for August - February 2012/2013. Total market projections are based on data collected from the point of sale systems of more than 1,200 snow sports retailers. Through February this season, snow sports retail sales reached $3.1B, up 2 percent when compared with dollars sold from August to February last season.

Retailers struggled to make up for slow sales in December due to the late start of the season’s snowfall. Although sales in January and February are healthy compared with the past four seasons, it has not been sufficient to make up for relatively lackluster sales earlier in the season. 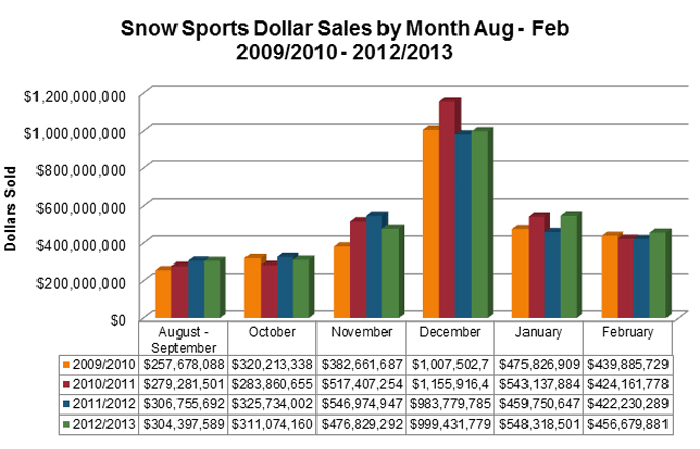 Specialty shops have sold through $1.7B in snow sports equipment, apparel and accessories and continue to be the widest distribution channel in the snow sports market. Sales in specialty shops are 1 percent lower or $18M less compared to Aug – February sales last season. The second widest channel is the Internet; consumers have spent $737M online for snow sports gear this season, about $68M more than they did August–February last season. Chain store sales are about even with last season’s sales at $694M. More than half (55 percent) of the dollar sales in chain are for apparel, 36 percent are for accessories like hats and gloves, and just 8 percent were spent on equipment.

Sales of equipment and apparel accessories increased 3 percent in dollars sold to $1B through February. Accessories that are needed on mountain and on trail, including hats, gloves, baselayer, goggles and camera equipment, enjoyed increased sales this season.

A late start to snowfall that depressed sales in November and December most likely prevented a palpable rebound in snow sports retail sales this season. However, sales during January and February were strong as snow finally fell and consumers returned to the slopes and trails. The cynicism that dominated the early season market after a dismal 2011/2012 season has dissipated. The mindset of the consumer heading into next season should be far more optimistic and therefore willing to spend.

SIA releases the topline results for snow sports retail seven times each season from November to May covering results of retail sales made between August 1 and March 31 each season. Topline/category retail sales data for the snow sports market is available as a member benefit to all SIA members. In addition, members gain free access to topline data for the Running, Outdoor and Paddle Sports when you register. The topline data is accessible on a 24/7/365 basis on Leisure Trends Cross-Industry RetailTRAK™ data portal. Non-SIA members may subscribe to the topline portal for just $375 per year.