EMP: CEO of REI, Sally Jewell, confirmed as U.S. Secretary of the Interior 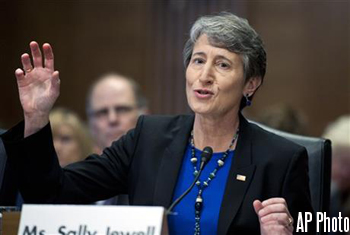 The Senate approved her nomination, 87-11, with all the no votes coming from Republicans. Senate Minority Leader Mitch McConnell, R-Ky., was among those who opposed Jewell.

One of the first challenges Jewell will face is a proposed rule requiring companies that drill for oil and natural gas on federal lands to publicly disclose chemicals used in hydraulic fracturing operations.

The administration proposed a draft "fracking" rule last year, but twice has delayed a final rule amid complaints by the oil and gas industry that the original proposal was too burdensome. A new draft is expected this spring.

Jewell also is expected to continue to push development of renewable energy such as wind and solar power, both of which are priorities of the interior secretary she succeeds, Ken Salazar.

Obama said in a statement Tuesday that Jewell's extensive business experience — including her work as a petroleum engineer — and her longtime commitment to conservation made Jewell the right person for the job.

"She brings an important mix of strong management skills, appreciation for our nation's tradition of protecting our public lands and heritage, and a keen understanding of what it means to be good stewards of our natural resources," Obama said.

Jewell, 57, of Seattle, also was a banker before taking over Kent, Wash.-based REI in 2005. She also served on the board of the National Parks Conservation Association, an advocacy group that works to protect and enhance national parks.

Jewell has made it clear she intends to strike a balance between the dual roles of conserving and developing resources, Sen. Ron Wyden, D-Ore., the chairman of the Senate Energy and Natural Resources Committee, said. "That's exactly the right approach to take on the diverse issues facing Interior, including safely developing natural gas, maximizing jobs and opportunities from recreation and improving management of federal forests."

Sen. Patty Murray, D-Wash., said she worked closely with Jewell on wilderness legislation in Washington state and was confident that Jewell "will bring her skills as an effective CEO in the business community to the Cabinet."

The Senate vote came after Sen. Jim Risch, R-Idaho, lifted a "hold" on Jewell's nomination. Risch and other lawmakers, including Sen. Dean Heller, R-Nev., have expressed concern that the Interior Department appears likely to list the sage grouse as an endangered species. Offering protections for the bird under the Endangered Species Act could severely restrict ranching, grazing, mining and other activities on public land in their states, the senators said.

Risch lifted the hold after the Interior Department agreed in writing to use the best science available and work in a "collaborative" way with Idaho officials on the sage grouse.

"Only by working together can we achieve solutions that are acceptable to all parties," Risch said in a statement, adding that he was pleased Jewell agreed with that approach.