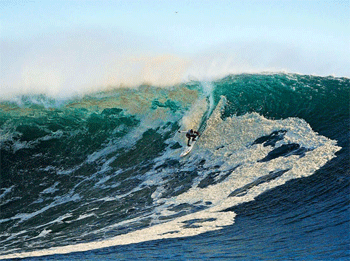 Patagonia Inc., the outdoor apparel company, is pleased to have welcomed to the family surfer Ramon Navarro in his hometown of Pichilemu, Chile last week. Besides the sound of solid swell, Pichilemu is typically quiet this time of year. This was not the case last Friday night when the Foo Fighters’ Taylor Hawkins played a private show at the Waitara Surf Bar to welcome big wave maestro Ramon Navarro to the Patagonia surf ambassador family – with a bang.

Taylor’s rock cover band, Chevy Metal, blew the roof off of the venue. Taylor Hawkins, Wiley Hodgen, Mick Murphy and John Lousteau plus fellow Foo Fighter Nate Mendel blasted out Van Halen, Black Sabbath and more to an amazed audience who knew this was a once in a lifetime experience.

At their Lollapalooza Santiago show two days later, Taylor told Perry Farrell and thousands of fans that Pichilemu, the band’s Chilean tour HQ, is one of the most beautiful places he had ever been and that Ramon Navarro is one of the coolest and craziest big wave riders he had ever met.

“It was fitting to throw a party for Ramon in his hometown, and having Chevy Metal there made it unforgettable,” noted Chris Evans, Patagonia’s director of Latin America. “In the same way that Ramon doesn’t hold back in his surfing, Taylor and the boys gave their absolute all – they could have easily been playing for 50,000 people.”

“I couldn’t be more excited to have Ramon as part of the team,” added Jason McCaffrey, Patagonia’s director of surf, “Ramon lives the Patagonia philosophy, charges hard in any and all conditions and most importantly is a solid human being in and out of the water. His addition and involvement with our team has been seamless and I liken it more to finding a brother than hiring an athlete.”

Making it global, Patagonia arranged to have a series of “welcome to the family” videos sent in from all over the world. The Malloy brothers, Dan Ross, Kohl Christensen, Jake Setnicka, Fletcher Chouinard and surfing legend Gerry Lopez recorded heart-felt messages for Ramon, adding to the excitement of the night.

“It was a great event. Thanks to Taylor, the band, and to Patagonia for this huge night. To receive such a warm welcome from all over the world while at home, with my friends & family, enjoying amazing music...I couldn’t ask for more,” noted surfer Ramon Navarro.

About Patagonia
Patagonia, Inc., based in Ventura, California, is a leading designer of core surf, outdoor, snow and sport-related apparel, equipment, footwear and accessories. The company is noted internationally for its commitment to authentic product quality and environmental activism, contributing over $49M in cash and in-kind donations to date. Incorporating environmental responsibility into product development, the company has, since 1996, used only organically grown cotton in its clothing line. Committed to making its products landfill-free, the company’s entire product line is recyclable through its Common Threads Initiative. The company also advocates corporate transparency through its interactive website, The Footprint Chronicles, which outlines the environmental and social footprint of individual products.