EMP: Freewaters Footwear Riding a Wave of Momentum Into Spring 2013 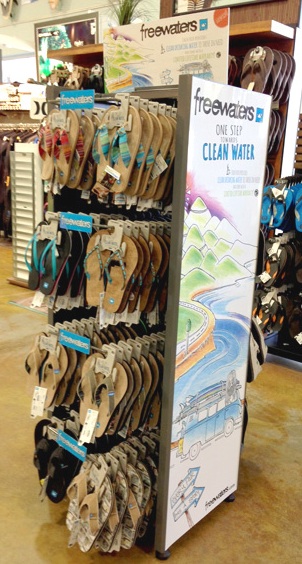 Laguna Hills, CA (April 17, 2013) – Responding to a 2013 sales surge and anticipating even greater demand for their shoe and sandal line in 2014, Freewaters Inc., is excited to share news of their strong momentum heading into the busy consumer buying season.  A new CFO, expanded sales rep force and the addition of multiple key specialty retailers in hot territories highlight strong growth for the casual footwear brand.  As part of its new branding messagingstrategy, Freewaters has just launched a new website featuring hand drawn illustrations and a user-friendly interface:  www.freewaters.com.

With new product partner Therm-a-Rest on board and key internal leadership expansions in 2012, Freewaters’ rapid growth was the catalyst for the addition of new CFO Robert ‘Bob’ Kelley.  Kelley brings over 25 years of experience within the apparel and action sport industries, holding titles such as Controller, CFO, COO and President with executive tenures at Adidas, Tyr and most recently at Sanuk.

“I had the distinct pleasure of working with Bob for over 8 years while at Sanuk” said Freewaters CEO John Vance. “He knows every aspect of how to stage a company for profitability, while being flexible to the changing markets and spending needs.  All of us at Freewaters feel very fortunate to have such a seasoned professional and genuinely good human on board with us at this early stage in our brand’s history.”

Freewaters Vice President of Sales, John Gothard announced a big expansion of the sales rep force, adding, “We are excited to have recently added the Nellos Sales Team, who will be covering New Mexico, south Nevada and Arizona.  Strat and his wife, Melanie, come to Freewaters with over 10 years of experience in selling sandals.  We have hired Pat Bohn who is covering the Ohio Valley for Freewaters along with Adidas Outdoor & FITS socks.  In Florida, we teamed up with two reps to cover the state: Terry Claudio covering the northern portion of Florida and Martin Barbosa covering the southern portion.  Both come with years of experience in the action sports industry. On the West Coast, we recently hired Brady Mitchell who will be handling San Diego and Joel Olenik in Orange County.”

“Now that we are shipping the spring line, we are already seeing a very favorable response in retail,” says Gothard.  Chuck Faust of BC Surf & Sport in Ft. Lauderdale comments, “I was really surprised how well they are selling.   For a brand new line to do this well I'm stoked!”

“We are so pleased to hear this feedback from the specialty stores.  They are why we exist,” says Gothard.  “I feel that our favorable 55% margins for the retailers plus our lifetime warranty for the consumers demonstrates to our retail partners that we are here to help them, not feed off of them.”

About Freewaters
Freewaters, founded by Martin Kim and Eli Marmar in 2010, was born out of their desire to make a difference.   Freewaters believes that access to clean drinking water is a fundamental human right.  The global drinking water pandemic is a growing, complex and serious issue.  The Freewaters approach however, is simple and not so serious. Freewaters makes innovative and easy-going footwear that transports you into vacation mode the minute you slip them on.  Each pair helps support global clean drinking water projects.  Every pair of Freewaters has a story, a human story.

Based in California, Freewaters soaks up the Cali spirit of innovation, cruising down the open road and spreading good vibes.  The Freewaters mantra is ‘do some good’ – a call to make the world a better place, little by little, step by step.  Visit www.freewaters.com to view our complete product line.