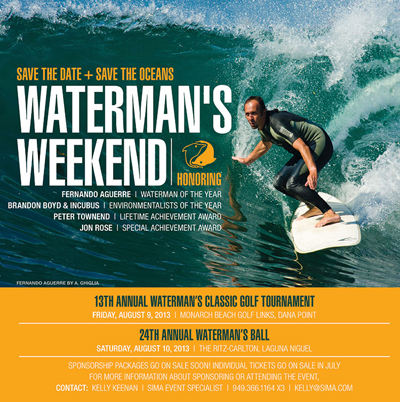 “Waterman’s Weekend is not only a time to raise awareness and funds for environmental causes, but it is also a time to recognize those who have committed themselves to the progression of the sport of surfing,” said Paul Naude, chairman of the Waterman’s Weekend Event Committee and president of the SIMA Environmental Fund Board of Directors. “I am blown away by the accomplishments, sacrifices, and passion of each of our honorees. Fernando, Brandon and Incubus, PT, and Jon all truly inspire our industry.”

WATERMAN OF THE YEAR

Many people know of Waterman of the Year, Fernando Aguerre, as the co-founder and former CEO of Reef, or for his lavish pants and wild outfits at surf industry parties. As president of the International Surfing Association (ISA), Fernando is working hard and meeting with top sports and government officials around the globe to make surfing recognized as an official Olympic sport. In the last three years he’s introduced countries from China to Afghanistan and even Turkey to surfing and the ISA – helping create an avenue for Surfing and StandUp Paddling in countries where the sport was virtually nonexistent. Leading the way for the sport and our industry, he's launched ISA and ASP events in China, the most populous nation in the world, and one where the surf industry has a huge opportunity to create a strong consumer foothold. Fernando is also an avid humanitarian. He started and served as first president of Surfrider Foundation in Argentina, co-created the Liquid Nation Ball, and served on the global boards and contributed significant income to charities like SurfAid International, Save The Waves, Quiksilver Foundation, SIMA Humanitarian Fund, and many more. He’s also a big-time surfer himself and epitomizes surfing’s spirit and culture. In 1984, with his brother Santiago, he started Reef sandals. As Chairman and CEO of Reef, he led the company not just in the U.S. but also opened a variety of distributorships in Europe and Latin America.

"Fernando remains dedicated to helping advance the sport of surfing, which is an important part of embodying the term ‘Waterman’ and is part of the reason he was selected for this honor by SIMA,” said Doug Palladini, SIMA president. “From taking the ISA into new regions, lobbying for surfing to become an Olympic sport, to keeping up on the latest with wave pool development, Fernando keeps the advancement of our sport and industry on the forefront of people’s minds.”

ENVIRONMENTALISTS OF THE YEAR

Musician, artist, environmentalist and surfer Brandon Boyd and his band, Incubus, will add 2013 SIMA Environmentalists of the Year to their long list of accolades. The Grammy-nominated musicians have a long history of efforts to help the environment, specifically ocean-pollution issues. A lifelong and still avid surfer, Boyd and Incubus created the “Make Yourself Foundation (MYF),” a registered non-profit organization, in 2004 to fund various charities around the world. One of the first charities to receive a donation was the Surfrider Foundation, who received $10,000 from MYF in support of Surfrider’s efforts to protect beaches and coastlines. The Make Yourself Foundation has gone on to raise more than $1.3 million since its inception, benefitting a variety of environmental groups including the Surfrider Foundation, Save the Waves, Heal the Bay, Reef Check and the Santa Monica Baykeeper. The band also makes great efforts to engage directly with their fans to help raise awareness for environmental causes. Band members all participated in the Surfrider Foundation’s Celebrity Surf Jam in Huntington Beach two years in a row. Huge crowds turned out each time, and in the water they raised more than a few eyebrows with their surfing. Out of the water, they patiently took the time to talk, take photos with, and sign autographs for every fan that approached them all the while helping to promote the Surfrider Foundation’s efforts. In 2009, they were also honored by Surfrider with the Keeper of the Coast award for their dedication to ocean-related environmental causes.

“The qualifications for SIMA Environmentalist of the Year are extremely precise and tailored to environmental efforts as they impact the surf industry,” said Naude. “As a passionate surfer, Brandon Boyd understands the importance of a clean ocean. It has come naturally to Brandon and his band mates in Incubus to use their position to promote environmental causes, and Incubus more than fulfills this prestigious role of SIMA Environmentalists of the Year.”

Lifetime Achievement Award recipient, Peter “PT” Townend, has a long list of accomplishments in both the sport and business of surfing. PT was the first World Professional Surfing Champion (1976) and was a dominant figure in professional surfing’s formative years, being ranked in the top five in the world from 1976-79. From doubling in the movie “Big Wednesday,” to working as a journalist at theSydney Daily Mirror, coaching and acting as the executive director of the National Scholastic Surfing association (NSSA) in the 80s, to working as publisher of the Surfing Group, being the voice of pro surfing on TV in the 90s, serving as SIMA president, founding and serving as president of Surfing America, to coaching the USA Surf Team, PT is an icon of the surf industry. Today, PT runs ActivEmpire (ATE), a brand consultancy company he formed 10 years ago, which specializes in brand management, athlete representation and special event marketing in the surf and skate markets. PT’s impact on the surf world is extensive, and SIMA is proud to honor PT with the SIMA Lifetime Achievement Award.

“For more than 40 years, PT has been truly dedicated to our sport,” said Palladini. “He puts the best interests of the sport first. PT was not only one of the pioneers of the new style of surfing in the 60s and 70s, but instrumental to the development of the professional side of surfing as well. He no doubt helped take surfing in the U.S. to another level as one of the founders of NSSA and helping create Surfing America. PT is a more than deserved recipient of this award.”

In addition, Jon Rose will be honored with a Special Achievement Award. A former pro surfer, Jon founded Waves For Water in 2009 after witnessing the devastation in Sumatra after a 7.9 earthquake. Jon knew surfers would want to give back to the regions they frequently travel if they only knew how. The eye-opening experience solidified the need for Waves For Water, a non-profit organization aimed to bring clean water solutions to impoverished countries around the world. Since then, under Jon’s direction Waves for Water has distributed thousands of water filters to areas such as Sumatra, Haiti, Chile and more. Jon also mobilized relief efforts in the wake of Hurricane Sandy, helping the people and environment of that devastated area. Jon’s leadership, work and dedication to helping make the world a better place are crucial and he represents the best of what surfers can be.

The two-day fundraising event benefits the SIMA Environmental Fund, a 501(c)(3) charitable foundation that awards grants to various environmental groups based on their dedication to preserving and protecting the world’s oceans, beaches and waves. Last year’s events attracted more than 700 people and raised more than $400,000 for 20 ocean conservation groups. The 2013 Waterman’s Weekend environmental beneficiaries and this year’s fundraising goal will be announced in the coming weeks.

The Surf Industry Manufacturers Association (SIMA) is the official working trade association of more than 300 surf industry suppliers. Founded in 1989, SIMA is a non-profit organization that serves to promote awareness of the surf industry and participation in the sport of surfing through public relations efforts and a variety of services, educational programs and research. In addition, SIMA actively supports oceanic environmental efforts through its 501(c)(3) charitable environmental foundation, the SIMA Environmental Fund. In the past 23 years, SIMA's Environmental Fund has raised more than $6 million for environmental groups seeking to protect the world's oceans, beaches and waves. The SIMA Humanitarian Fund, also a 501(c)(3) charitable foundation, was established in 2006 to award grants to various surf or boardsport related social and humanitarian non-profit organizations whose efforts are focused on improving the quality of life, health and/or welfare of people. The Stokes Me Campaign serves as the annual fundraiser for the SIMA Humanitarian Fund.