SKATE: The Sheckler Foundation's 4th Annual Skate for a Cause Presented by Etnies is a Success 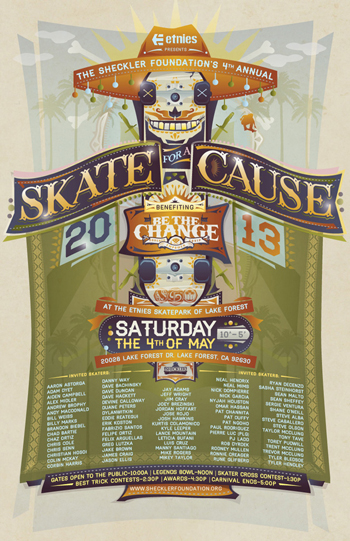 The money raised will go to building a skatepark on the Port Gamble S’klallam Reservation as a part of the “Be the Change” project.

Skateboard legends Sergie Ventura, Jay Adams, Aaron Astorga and Dave Hackett were among the many that competed in the skatepark’s Shark bowl but it was Christian Hosoi that took home the GoPro Legends Bowl title this year.

The Sheckler Foundation would like to extend a big thanks to all of the skateboarders, sponsors and event goers who came out to support the cause and “Be the Change” by raising funds to build the skatepark on the Port Gamble S’klallam Reservation.

About The Sheckler Foundation:
Founded in 2008, The Sheckler Foundation was created as an avenue for Ryan Sheckler, his family, friends and business associates to give back to the community and industry that they are so grateful for. Fueled by the desire to contribute to the many causes that directly benefit and enrich the lives of children and injured action sports athletes, The Sheckler Foundation will produce fundraising events, passion projects and web-based initiatives to raise capital and awareness. Our ultimate goal is to empower our community to “Be the Change!”