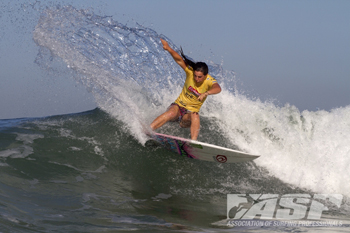 Wright dominated the Barra Da Tijuca lineup from start to finish, posting the high scores of each round with incredible progressive combinations on the punchy righthanders. The Australian’s efforts against Fitzgibbons in the Final were no different, as Wright unloaded committed forehand combinations and was rewarded a 9.33 and 8.50 to secure the win.

“This feels pretty good,” Wright said. “This whole event has been stepping stones for me. I started off a bit shaky and this is my first even where my family is not here with me. Brooke Farris was here looking after me and thanks to everyone for all of their support. After I lost that Round 3 heat I just wanted to catch waves and I stayed busy from then on. It’s just the way it worked out. I just love catching waves. I just kept building and building and I wouldn’t want it any other way. This is just fantastic to come to Rio, I love it.”

Wright’s victory in Rio marks her second of the season following a win on the Gold Coast and the two victories combined with two additional runner up finishes have launched Wright to the No.1 position over Carissa Moore (HAW), 20.

“It’s awesome to move to the top of the rankings, but I’m honestly not thinking about the World Title,” Wright said. “I’m just having fun surfing and enjoying each event and we’ll see what happens at the end of the year.”

Sally Fitzgibbons, defending event champion, put in an amazing effort in an attempt to retain the Colgate Plax Girls Rio Pro Title, seamlessly linking fluid backhand combinations on the Barra Da Tijuca lefts en route to another Final. Fitzgibbons ousted Oahu talent Carissa Moore in their Semifinals bout, but was unable to put a stop to Wright’s momentum in the Final to finish runner-up overall.

“I’m happy to progress though to the Final,” Fitzgibbons said. “It’s always exciting to come in to a final against Tyler (Wright) and I knew she’d be tough to beat out there. I love coming to Rio and I always get good results here. Unfortunately I fell at the last hurdle, but I’ll come back bigger and better next year.”

Fitzgibbons’ runner-up finish at the Colgate Plax Girls Rio Pro moves her to No. 3 on the ASP Women’s WCT.

Carissa Moore, 2011 ASP Women’s World Champion, donated another strong performance this season at the Colgate Plax Girls Rio Pro, finishing equal 3rd overall. The Hawaiian champion was looking dangerous for yet another Final appearance this season after defeating Laura Enever (AUS), 21, in the Quarterfinals, but fell to Fitzgibbons in their Semifinal match up.

“It was good heat with Sally, but there were just not that many waves,” Moore said. “We paddled all over the beach and sometimes it turns in to strategy and paddle battling and unfortunately I was on the other end of it today. It’s alright though and I’ll take this on to the next event.”

Moore, who was leading the women’s ASP WCT rankings entering Brazil, has been relegated to the No. 2 position following Wright’s victory, but is still well within contention of the 2013 ASP Women’s World Title.

“I have never been thinking that I’m running away with the World Title at all,” Moore said. “I’m just happy to be in the race. I know it’s going to be tough if I want to win the World Title again and other girls want it just as bad.”

Bianca Buitendag (ZAF), 19, ASP Women’s WCT Rookie, earned the best result of her young career, finishing equal 3rd overall. Buitendag displayed crisp surfing on both her forehand and backhand while besting hungry American Courtney Conlogue (USA), 20, in the Quarterfinals, but was unable to surpass Tyler Wright in the Semifinal.

“I think it’s the best result of my professional career,” Buitendag said. “I’m really happy with my result and happy to be here in Brazil. It’s good to get my head above water for a change. I’d been in a tough mental space over the last few events and kind of putting myself down and this allowed me to think and surf smarter. Now that this event is over I’ll be able to go back and analyze my performance.”

Highlights from the Colgate Plax Girls Rio Pro will be available via http://wctbrasil.com/rio13

Event organizers will reconvene tomorrow morning at 7:30am local time for a possible start to Round 2 of Billabong Rio Pro Men’s competition.