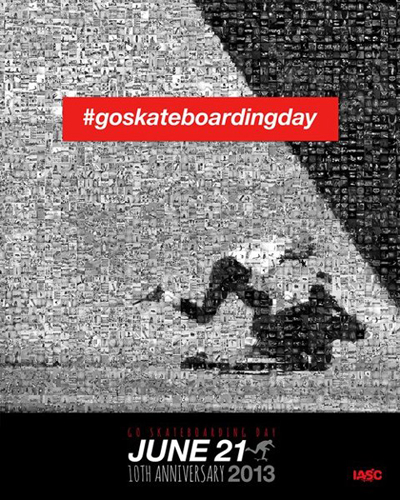 IASC and the Go Skateboarding Foundation to Distribute 1,000 Skateboards to Local Youth
IASC Partners with Smithsonian’s Lemelson Center for the Study of Invention and Innovation on Innoskate 2013 Event
Press Release from Shout PR

Rancho Santa Margarita, Calif. – The International Association of Skateboard Companies (IASC) is excited to announce the 10th annual Go Skateboarding Day, slated to take place on the first day of summer, June 21, 2013 with events around the globe. This year the organization is hosting and participating in a series of premier, fun-filled events in Washington D.C., including a partnership with the Smithsonian’s Lemelson Center for the Study of Invention and Innovation.

IASC and the Go Skateboarding Foundation (GSF) will start Go Skateboarding Day with its Just One Board recycling initiative by partnering with local youth organizations to distribute 1,000 complete skateboards in D.C.

Launched in 2012, GSF’s Just One Board recycling initiative program collects and refurbishes used, but functional, skateboard equipment, re-assembles it with the help of local skateshops and distributes the complete skateboards to local community organizations for underprivileged youth. Last year, Just One Board partnered with the Lower 9th Ward Village, the Tony Hawk Foundation, the Make It Right Foundation, Humidity Skate Shop and Urban 9 Skateshop, to distribute 1,000 complete skateboards to kids in New Orleans’ Lower 9th Ward neighborhood.

Innoskate 2013
IASC and the Smithsonian’s Lemelson Center for the Study of Invention and Innovation will present Innoskate, a public festival located at the National Museum of American History on the National Mall, so named to reflect skate culture’s widespread innovative spirit.

“Working on a skateboarding event with the Smithsonian’s Lemelson Center is by far the most surreal moment of my career. It’s amazing that this idea Don Brown had to get together with some friends on the Huntington Beach pier and celebrate skateboarding 10 years ago has grown to a point where we’re being invited to share our love of skateboarding on such an amazing stage,” said Josh Friedberg, Executive Director of IASC.

Innoskate kicks-off on Friday, June 21st, with an evening showing of Bones Brigade: An Autobiography, with special appearances by members of the Bones Brigade in the museum’s Warner Bros. Theater. On Saturday, June 22nd, there will be panel discussions throughout the day that address evolving technology such as decks, wheels and trucks as well as innovations in tricks and skate fashion, and demonstrations by pro and invited skaters on a mini-ramp built on the museum’s terrace facing the National Mall. Participants scheduled to attend include Tony Hawk and Rodney Mullen. Innoskate will close with an evening screening of Waiting for Lightning. For a full schedule of events, visit : http://innoskate2013.tumblr.com/

“Skateboarding is surrounded by a culture of inventive creativity and imagination,” said Jeffrey Brodie, Deputy Director of the Lemelson Center. “Skateboarders are similar to inventors in viewing the world from a unique perspective—what it has the potential to be. Innoskate will be a deep look into an American invention that has become a global phenomenon.”

Go Skateboarding Day Poster
While GSD is celebrating its 10th Anniversary, the GSD poster is celebrating 5 years since its inception. In 2008, the first collectable GSD poster was introduced as a way to bring more awareness to Go Skateboarding Day. Posters are designed each year by well-known artists and professional skateboarders and in the past have included Ed Templeton, Steve Caballero, Shepard Fairey, Jim Phillips and Natas Kaupas. This year’s Go Skateboarding Day poster was created with Grant Brittain’s iconic push photo of Tod Swank and over 6,000 Instagram images tagged #goskateboardingday in 2012. A limited number of posters and prints are available for sale online with all proceeds going to support the Go Skateboarding Foundation, a 501(c)(3) non-profit corporation.

Go Skateboarding Day began as a small group of colleagues skating to the Huntington Beach Pier in California and has grown into a global phenomenon. Last year, millions of skateboarders participated in more than 500 events held worldwide in countries like Columbia, South Africa, China, Philippines, Afghanistan, Czech Republic and Brazil. Go Skateboarding Day works to honor and unite participants in the spirit of skateboarding and, since its 2004 inception, has prompted cities to build skate parks, promoted local skate shops and raised money for local charities.

About Go Skateboarding Day
Go Skateboarding Day, held June 21st of every year, is the official holiday of skateboarding. Event locations are disclosed at local skate shops and on http://facebook.com/goskateboardingday, where you will also find info on how to create your own event, fundraiser or rally and more. While the holiday grows, the mission remains the same: Go skateboarding and have fun!

About Just One Board
Just One Board is a skateboard-recycling program created by the International Association of Skateboard Companies charitable arm, the Go Skateboarding Foundation, to benefit underprivileged youth, engage skateboarders with their local community, support skateboard retailers and serve as the base of a campaign promoting the positive power of skateboarding. For more information please visit: http://justoneboard.org/.

About Lemelson Center for the Study of Invention and Innovation
The Lemelson Center has led the study of invention and innovation at the Smithsonian since 1995. The Lemelson Center for the Study of Invention and Innovation’s activities advance scholarship on the history of invention, share stories about inventors and their work and nurture creativity in young people. The center embodies a philosophy akin to that of the inventors it studies, of valuing creativity and embracing the potential rewards of intellectual risk-taking. The Center is supported by The Lemelson Foundation, a private philanthropy established by one of the country’s most prolific inventors, Jerome Lemelson, and his family. The Smithsonian’s Lemelson Center is located at the National Museum of American History. For more information, visit http://invention.smithsonian.org.