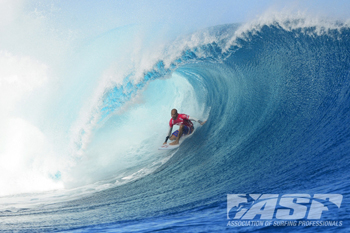 Stop No. 4 of 10 on the ASP WCT, the Volcom Fiji Pro saw several days of world-class surf at both Restaurants and Cloudbreak and a series of mixed results from the ASP Top 34 frontrunners shook up the current race for the ASP World Title.

Slater built momentum throughout the Volcom Fiji Pro, peaking on the final day of competition. The 11-time ASP World Champion’s road to victory included a perfect 20-point heat against Sebastian Zeitz (HAW), 25, in the Quarterfinals, a victory over John John Florence (HAW), 20, in the Semifinals, culminating with a win over Fanning in the Final that included a near-perfect 19.80 out of 20 heat total.

“What a day,” Slater said. “That was insane. When we stared out in the Final, Mick had position and I was a little deep, but the next one was unbelievable. I want to dedicate this to my brother and his wife and their new kid Van. He told me that if I missed the birth of his son, that I’d better win, so this is for you. I want to say hi to everyone at home. What can I say, what a day.”

Slater made history in his Quarterfinals match against Sebastian Zietz, collecting only the fourth perfect 20-point score on ASP record. Slater’s two unbelievable 10 point rides came compliments of deep backhand tuberiding and while the Floridian has netted several perfect 10-point single-wave scores, the perfect 20 heat marks only the second of Slater’s lengthy career.

“The waves are the stars today,” Slater said. “When they come, they’re unbelievable. I missed one in that heat that was insane. The second 10 that I got, Seabass (Sebastian Zietz) maybe could have got it, but he was a little deep. It just hit that inside and ran. It reminded me of the one yesterday that i didn’t come out of and I just though, ‘just keep going forward, don’t make the same mistake as yesterday.’ When waves are this good, I don’t discount it happening a few times in this event because the waves are there, you just have to stand up on them. Theoretically, I could have had three 10s yesterday, the waves were just that good. It’s a special thing if you can get a 10 in a heat, so I’m really stoked.”

Mick Fanning displayed incredible backhand barrel-riding skills at Cloudbreak, driving through deep tubes and unloading massive turns on his way to the Final. Fanning would go on to best close friend and reigning ASP World Champion Joel Parkinson (AUS), 32, in the Quarterfinals and deadly goofy-footer C.J. Hobgood (USA), 33, in the Semifinals but was unable to match Slater in their bout for the win.

“I’m pretty stoked,” Fanning said. “I started off with the 9.2 and saw Kelly doing the Jesus Christ on the one behind it. When Kelly didn’t get a 10 on his first wave, I thought, ‘I’m still in this,’ but then he shut the door on the next one. Overall I’m happy. I didn’t really have a good start to this event and then at the end it came good.”

John John Florence marked an incredible return to competition following an injury sustained on the Gold Coast, collecting two perfect 10-point rides over the course of the event while taking an equal 3rd place finish. Florence looked deadly again on the Final day of the Volcom Fiji Pro, besting South African powerhouse Jordy Smith (ZAF), 25, in their Quarterfinals clash, but was unable to surpass Slater’s rampage in the Semifinals.

“It would have been nice to go one round further and make the finals, but a third is a good result and we got sick waves throughout the event,” Florence said. “To get a third in my first event back since my injury is a good start and hopefully I can do well in Bali.”

C.J. Hobgood got the best of several scrappy heats throughout the Volcom Fiji Pro, but found some excellent barrels in his Semifinals clash against Mick Fanning. Unfortunately for Hobgood, Fanning would find a buzzer-beating wave in the final seconds of their match-up, handing Hobgood an equal 3rd place finish.

“I had some really slow heats throughout the event, but making it that far, you always want to make the final,” Hobgood said. “Mick and I actually had some good waves in that heat finally, and he just got me at the end. It’s a bummer to lose at the end of the heat like that, but congrats to Mick on the win.”

For Volcom Fiji Pro highlights log on to www.volcomfijipro.com.