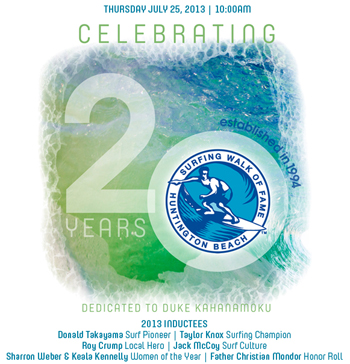 The Surfing Walk of Fame is the only tribunal in surfing to award specific categories as well as require a 10-year margin since the commemorating achievement. This year’s recipients will be cemented alongside past inductees, earning their immortal place in the pavement on the corner of PCH and Main Street, directly across from the famous pier in Surf City USA -- Huntington Beach, California.

“The Surfing Walk of Fame board of directors is very excited with this year’s voter-selected honorees for the 2013 induction,” said Don MacAllister, SWoF Chairman of the Board. “Celebrating our 20th year, we mail ballots throughout the world and gather votes to make our selection.”

The late Donald Takayama will be honored with the Surf Pioneer award. Takayama, who could be considered the first-ever professional surfer, is perhaps more known for his technique in the shaping room. Hawaiian by birth, Takayama moved to California at the age of 12 to work under Dale Velzy. After a lengthy boardbuilding career, Takayama passed away in 2012 due to complications during heart surgery.

Carslbad CA’s WCT veteran Taylor Knox received the Surfing Champion nod this year. Knox, a renowned power surfer, retired from full-time ASP competition in 2012 after one of the longest stints on tour in history – 19 years. His banner year was in 2001, when Knox finished fourth in the ASP ratings.

Keala Kennelly and Sharron Weber share this year’s Woman of the Year award. Kennelly, a multiple XXL winner, has been on the global big-wave scene since retiring from full-time ASP competition in 2007. Weber was a former U.S. Champion and World Champion throughout the late 1960s and early 1970s.

Here are the voting criterions used to decide each division:

SURF PIONEER – Nominees achieved surfing fame as a respected surfer or pioneer in the time before major championship; candidates must either be at least 50 years old or deceased.

SURF CULTURE – Inductees are nominated from the arts and/or industry, and must have helped create and define surfing culture.

WOMAN OF THE YEAR – Any female who meets the qualification in any of the four categories: surf champion, surfing culture, local hero, or surfing pioneer.

LOCAL HERO – Nominees must have resided in Huntington Beach for at least 10 years, graduated from Huntington Union School District, been a finalist in the surf champion category, contributed to Huntington surfing culture, been a surfing pioneer in the city or a past champion at the annual Huntington Beach City Championships.

HONOR ROLL – Recipients of the honor roll award deserve recognition du to their important contributions to the sport of surfing and its culture, but hey do not qualify under the specific guidelines of the other five walk of fame categories. The honor roll is the only category chose by the walk of fame board of directors.

This year’s honorary induction ceremony will take place during the U.S. Open of Surfing outside of Jack’s Surfboards in Huntington Beach on July 25th.