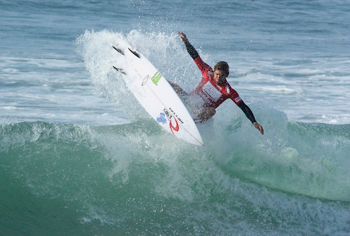 Perillo wasted little time in the Final, posting an 8.67 and 8.47 for an eclectic mix of committed forehand maneuvers, immediately placing De Vries in a combination situation. Perillo turned up the intensity as the heat progressed, unloading the highest single-wave score of the event of 9.57 for an explosive three-turn combination, solidifying his first major ASP Men’s victory.

“I don’t even know what to say,” Perillo said. “Mexico is one of my favorite places in the world. I’ve been coming down here surfing with my Dad since I was a little kid. This was a sick contest. I was so nervous the whole time in the Final. I was just telling myself to breathe and try and relax.” 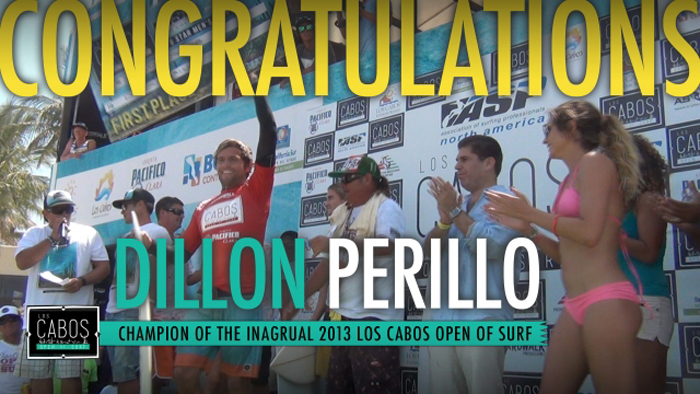 Perillo, a former standout on the ASP North America Pro Junior Series, has focused the last few years of his career on free surfing, but has returned his focus to competition in 2013.

“After the Junior Tour I went on a free surf tour for a few years and this was the first year that I told myself I was going to really try in contests,” Perillo said. “At the beginning of the year I didn’t do so well. I went to Pipeline and lost, Newcastle I made two heats, made a heat in Puerto Rico and lost first heat in Japan, and then to win here, it’s crazy. I’m doing Acapulco and El Salvador and hopefully I can do well.”

Beyrick De Vries was impressive on the final day of competition, quietly navigating his way to the final while topping some of the event’s top seeds. The South African fought hard in an attempt to overtake Perillo for the win, but was unable to surpass Perillo for the win.

“I came in to this contest and I was happy to make it from my Round of 96 to 48 because I’m just trying to make it to the midyear cutoff so I can be in the Primes for the next half,” De Vries said. “I’ve just come off of a knee injury and this is my first event where I’ve been able to put an air in to my repertoire. I’ve been surfing safe at a lot of contest and doing them just to keep a seed. To be able to surf out there and get second, I’m just overwhelmed, I’m so happy.”

Tanner Gudauskas (San Clemente, CA), 24, was impressive on his backhand throughout the entirety of the Los Cabos Open of Surf and was in excellent form on the final day of competition, besting event favorite Heitor Alves (BRA), 31, in the Quarterfinals. Unfortunately for the goofy-footer, he was unable to find the waves needed to surpass Perillo in their Semifinals match, taking an equal 3rd place finish.

“It’s slowing down out there and Dillon (Perillo) made the right choices on wave selection,” Gudauskas said. “It’s always tough to come this close to the Final, but congrats to Dillon, he surfed well. Overall 3rd is a good result and I’ll take this on to Ballito.”

Vicente Romero (ESP), 19, put together a breakout performance at the Los Cabos Open of Surf, finishing equal 3rd overall to secure the best result of his young career.

“I’m pretty happy, this is the biggest result of my life and I don’t have a sponsor,” Romero said. “This is only the second event I’ve done this year and I would have liked to make it to the Final but my goal was to collect enough points to eventually get in to the Prime events, so I’m pretty stoked.”

Vicente, who entered the Los Cabos Open of Surf at 342 on the ASP World Ranking, will skyrocket up the rankings due to his efforts in Mexico and hopes to carry his campaign throughout the remainder of the Latin leg.

“I didn’t go to Australia because I didn’t have the money,” Romero said. “I asked my Grandmother to lend me 500 dollars to go to Mexico and she helped me and I told her I’d try to do my best so I’m really happy. I’m going to Acapulco and El Salvador after this so this is a great start.”

For Los Cabos Open of Surf highlights log on to www.loscabosopenofsurf.com

For additional ASP information log on to www.aspworldtour.com or www.aspnorthamerica.org