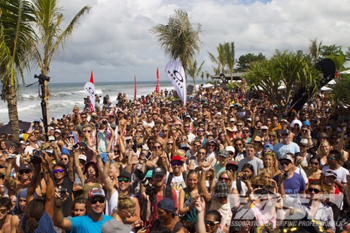 Stop No. 5 of 10 on the ASP World Championship Tour (WCT), the Oakley Pro Bali hosted a historic high-performance showdown including perfect heats and next level progression from the world’s best surfers, culminating with Parkinson’s hard-fought victory over Bourez in the Final.

Parkinson was quick to adapt to the changing conditions on the final day of action, besting fellow countrymen Taj Burrow (AUS), 35, and Josh Kerr (AUS), 29, en route to the Final. The natural-footer got off to a slow start on his road to victory, but an impressive series of fully-committed forehand combinations on a steep righthand wall would see the reigning ASP World Champion surpass the Tahitian in the final minutes for the win.

“That was amazing,” Parkinson said. “That was the coolest experience coming up the sand. It wasn’t the greatest of the finals and I knew it wasn’t over. I figured if I got the best wave towards the end figured I’d have a chance. Michel (Bourez) ripped and was probably the most in form surfer of the event. I dropped off my four fin back to my three fin and just didn’t get a good pump in that one good barrel and was hoping it didn’t lose me the final. From then on I knew I had to go to do turns.”

The Oakley Pro Bali marks Parkinson’s first ASP WCT victory of the season, vaulting the stylish Australian to No. 3 on the rankings and within striking distance of the 2013 ASP World Title.

“This gives me heaps of motivation moving forward,”Parkinson said. “I’ve had two bad results and I knew I could change it around, but I’m glad I did it now rather than later. This win is so special because the event had such a good vibe around the event and such good energy about it. This was huge. The event lived up to they hype because guys were going absolutely crazy. It was one of the best events I’ve been involved in.” 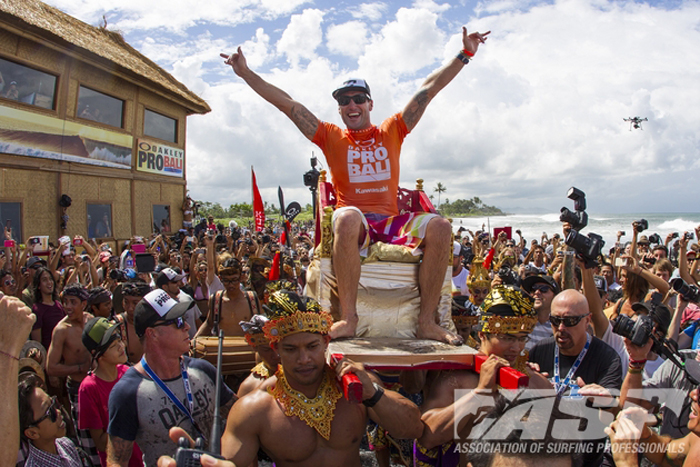 Michel Bourez attacked the flawless righthanders of Keramas with incredible power, besting two-time ASP World Champion Mick Fanning (AUS), 32, and dangerous rookie Nat Young (USA), 22, on his way to the Final. Bourez would hold the lead throughout the majority of the Final, but was unable to block Parkinson’s late-heat charge, taking both a runner-up finish and the best ASP WCT result of his career.

“It’s really good just to make the final and it was my first final ever,” Bourez said. “This event has been great for everyone with barrels everyday. The culture and people of Bali are amazing and I’m just happy to put Tahiti on the podium. I feel confident going in to Tahiti and want to go there relaxed and do my thing.” 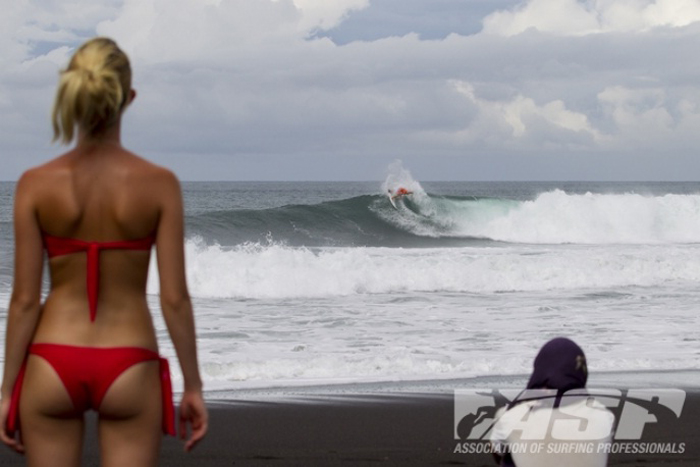 Nat Young (USA), 22, ASP WCT Rookie, continued to impress in Bali, threading excellent barrels and igniting deadly backhand turns at Keramas en route to a Semifinals finish. The Santa Cruz native was on the way to his second Final appearance of the season, but was stopped short by a rampaging Michel Bourez, finishing equal 3rd overall.

“I felt like I surfed alright,” Young said. “I broke my really good board the heat before that and had to switch over to a different one. I got a couple of good waves and watched Michel take off on that wave with 20 seconds left. There was nothing I could do. It would have been nice to make the final, but I’m stoked to get 3rd and I’m stoked for Michel.”

Josh Kerr (AUS), 29, was deadly at the Oakley Pro Bali, reveling in the technical barrels and Balinese walls of Keramas. Kerr looked fit for a final following an incredible Quarterfinals victory over former ASP World Champion C.J. Hobgood (USA), 33, but was unable to find a rhythm in his Semifinals match up against Parkinson, finishing equal 3rd. The result marks Kerr’s best result of the season.

“It would have been nice to go one better and make the Final, but a third place is a good result,” Kerr said. “This is my best result of the season and hopefully I can carry this momentum on to Tahiti and go one better there.”

With an equal 5th place finish at the Oakley Pro Bali, two-time ASP World Champion Mick Fanning (AUS), 32, has overtaken then rankings leader Kelly Slater (USA), 41, for the frontrunner position for the 2013 ASP World Title. While Fanning has been incredibly consistent throughout the season, he hopes to ramp up his performances through the back half of the year in an attempt to take a third crown.

“I’m happy with the result,” Fanning said. “It felt like I didn’t get waves, but things fired pretty well for me overall. I had an opportunity with Michel and was just a little too deep, but I’ve got to be happy with myself for holding strong when times were slow and it was a great event. It’s just fired me up more for the next events. It would have been good to get some more points, but it’s still a result. I’ve got five out of five now and just go for it towards back half of the year. I’ve got two throwaways, but I don’t have a big lead because the other guys got wins and now it’s about putting it together.”

Highlights from the Oakley Pro Bali are available via www.oakleyprobali.com