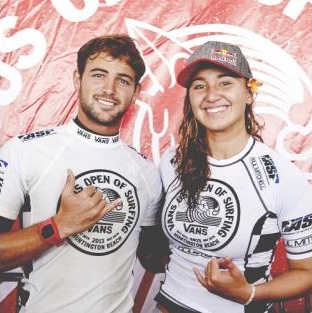 The 2013 Vans US Open of Surfing is officially a wrap! Congratulations to Alejo Muniz and Carissa Moore, the 2013 Champions and Kolohe Andino and Courtney Conlogue, this year's Runner-Ups.
Press Releases from ASP

The Vans US Open of Surfing is the fourth of eight ASP Prime events on the 2013 calendar, offering crucial points towards surfers’ ASP World Ranking and a coveted US$100,000 first place prize purse.

Muniz would get the best of an opening exchange with Andino, belting a 8.43 for a series of seamless frontside turns. The Brazilian would quickly backup the ride on his backhand, scalping a 7.80 on a left breaking in to the pier to solidify the victory.

“I’m so happy, I can’t believe it,” Muniz said. “Today marks the four-year anniversary of my grandfather’s passing and I’d like to dedicate this win to him. This is the biggest win of my career and it’s the biggest crowd I’ve ever surfed in front of. I knew I had to get scores and the waves were dying a little bit with the high tide and the ocean really cooperated with me today.”

Muniz, who entered the Vans US Open ranked No. 24, had struggled to find a big result throughout the first half of his ASP season, but vaults to No. 15 on the rankings compliments of his win in Huntington Beach today.

“I’ve been really focused because I hadn’t really had big results coming in to this event,” Muniz said. “I was putting everything in to this event and the work paid off. I focused more on myself rather than who I was surfing against and what scores they were getting. I’ve been getting good scores, but losing heats for some reason. I knew inside that I just needed to get the good waves and surf how I could. I’m stoked that I was able to do it this week. I think I surfed smart all week and it’s been amazing.”

Kolohe Andino was the last Southern Californian remaining in men’s competition and was in dangerous form entering the final. The progressive regular-footer would open his final exchange with a 7.77 but was unable to find the second score needed to surpass Muniz, finishing runner-up overall.

“Congratulations to Alejo,” Andino said. “He surfed amazing all week. It would have been nice to win, but I just couldn’t find a second wave and I’m happy that I made the final.”

Bede Durbidge (AUS), 31, unloaded signature power-surfing throughout Vans US Open, besting fellow ASP WCT standout Michel Bourez (PYF), 27, while advancing to the Semifinals. The Australian was unable to surpass Andino in the Semifinals, but hopes to take his success in Huntington Beach to the back half of the year.

“Not many people would have picked me to make the Semifinals in this event so it was a good result for me,” Durbidge said. “I came over here to just get back to winning heats and I got four or five wins under my belt and I’ll just take that momentum in to the back half of the year.”

Matt Banting (AUS), 18, proved to be darkhorse of the 2013 Vans US Open of Surfing, besting a flock of the world’s best surfers on his way to an incredible equal 3rd place finish. Banting went on to eliminate Jordy Smith (ZAF), 25, in the Quarterfinals, but was unable to surpass Muniz in their Semifinals clash. Banting’s result launches him from from 92 to 41 on the men’s ASP World Ranking.

“I’ve dreamt of that heat against Jordy (Smith) my whole life and to surf against him and to beat him, I’m so happy,” Banting said following his Quarterfinals win. “I was just wishing that no waves would come and to just better that 3.77 on my final wave. I’m just frothing. I’m not trying to qualify just yet. I’m taking it heat-by-heat and to beat Jordy, anything after that would have been a bonus.”

Moore got off to a dominant start in her final clash, earning an 8.17 and 7.83 to launch out to an early lead. The talented Hawaiian would hold on to the win despite a late-heat rampage from Conlogue, solidifying her third ASP Women’s WCT event win this year.

“To be honest I’m a little shocked right now because I thought Courtney (Conlogue) won when the crowd erupted on that last wave,” Moore said. “I let her go and I had priority and it was a bad decision, but I’m stoked that it worked out in my favor. I was happy to be in the final and Courtney’s in the title race and I had fun, but I was definitely nervous at the end of that heat. It’s such an honor to win this event in front of this big crowd. I feel amazing!”

Conlogue put in an amazing showing in front of her hometown crowd, besting then ratings’ leader Tyler Wright (AUS), 19, in the Semifinals. The regular-footer would fight hard to surpass Moore in the back half of the heat with her best two rides coming in the last five minutes. Unfortunately for the Californian, she was unable to surpass Moore’s opening heat efforts, finishing runner-up overall.

“It was definitely an amazing heat and Carissa (Moore), she’s been surfing really well,” Conlogue said. “With everyone screaming and the crowd on the pier I was definitely wanting to win. I was trying to be progressive and surfing the best that I could.”

Conlogue, who now sits at No 3 on the ASP Women’s WCT, is hoping to carry her momentum in to the final two events of the season in an attempt to rally for the 2013 ASP Women’s World Title.

Tyler Wright (AUS), 19, was dominant throughout the Vans US Open of Surfing, earning her career-best result in Huntington Beach. The talented Australian’s run would end in the Semifinals, as she was stopped short by in-form local Courtney Conlogue, finishing equal 3rd overall.

“I did the best I could with what I had out there and Courtney (Conlogue) caught the best waves,” Wright said. “A 3rd is the best result I’ve ever had here at the US Open and I’m happy with that.”

Pauline Ado (FRA), 22, matched her career-best result and crucial points towards her requalification campaign with an equal 3rd place finish. Ado put in a stellar performance throughout the Vans US Open of Surfing, but was unable to surpass Moore in their Semifinals heat. Ado now sits No. 10 among the ASP Top 17 due to her efforts.

I’m a bit disappointed with my heat today,” Ado said. “I couldn’t find any good waves and feel like I didn’t surf my best, but I’m stoked on the result overall. I’ve had a great week at this event and a 3rd is putting me in a better position before the last two events in Europe.”

The Vans US Open Pro Junior plays a crucial role in surfer’s qualification campaigns for the ASP World Junior Championships and has also drawn several of the globe’s top under-21 talent competing in both the men’s and women’s main events.

Conner Coffin secured back-to-back US Open victories, dominating the international field of Carlos Munoz (CRI), 20, Jake Halstead (La Jolla, CA), 19, and Ramzi Boukhiam (MAR), 19, from start to finish with selective wave strategy. Coffin would ride only three waves in his heat, securing an 8.17 and 7.60 to secure the win.

“I almost didn’t go on that first little left,” Coffin said. “I thought there were going to be more waves, but that first one kept walling up on the inside and it felt good to start with an 8. It was a gnarly final and I knew an 8 wasn’t going to cut it. I felt a little relieved when I got the 7, but knew the guys were capable of big scores. I knew Carlos (Munoz) could throw some crazy Hail Mary and pull it. I was shaking during the last two minutes. I was so nervous, but this is the best feeling ever, winning and having my family chair me up the beach. Last year was awesome and I’m just so happy to win again.”

“I’m really happy,” Buitendag. “I had tough competitors in that heat and Nikki (Van Dijk) and and I have been competing against each other for the last two years. I knew I had to pull out my A game and it was a relief after getting knocked out of the quarterfinals of the women’s event this morning. I’m lucky that I got that first set. It put me in to a good frame of mind. Winning this event means a lot to me, there are so many people watching and so many people excited about women’s surfing.”