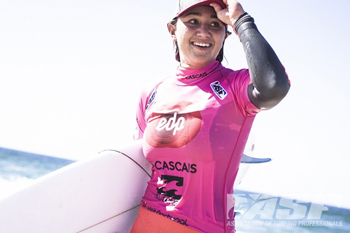 GUINCHO, Cascais/Portugal (Saturday, October 5, 2013) – Carissa Moore (HAW), 21, has claimed the 2013 ASP Women’s World Title on the final day of the final event of the season, the EDP Cascais Girls Pro presented by Billabong.

Moore secured her second world surfing crown after sole remaining contender Tyler Wright (AUS), 19, was eliminated this morning by compatriot Sally Fitzgibbons (AUS), 22, in the Quarterfinals of the event at Portugal’s Guincho Beach.

The young Hawaiian, who was in the water for her own Semifinal heat when the decision came through, was beside herself once she returned to the beach where she was greeted by throngs of friends, family and admirers.

“I can’t really speak right now because I’m so happy,” Moore said. “I woke up this morning listening to music and I started crying because I really felt like today was my day. I’ve been supported so much by my Dad and boyfriend and sister and all my family and friends. This is really special for me because I get to share it with all of them.”

In one of the closest battles for the world surfing crown that the ASP has ever witnessed, the Hawaiian and Australian went blow-for-blow in 2013, collecting five victories of the first seven events between them.

“This title is much sweeter as it was so close with Tyler (Wright),” Moore said. “She’s so young, but so strong and fearless when it comes to competition. She can always come back and really pushed me to work my hardest this year. I won some different events this season and it all amounted to a really meaningful year for me.”

Wright was gracious in defeat and will remain a threat for years to come.

“It’s been an incredible year for me and a huge congrats to Carissa (Moore),” Wright said. “She is an amazing surfer and has pushed me a lot this season. The talent level on tour at the moment is so high, and the platform we’re going to have in 2014 is really exciting. Very much looking forward to next year.”

Highlights from the EDP Cascais Girls Pro presented by Billabong will be available via www.aspeurope.com/edpcascais 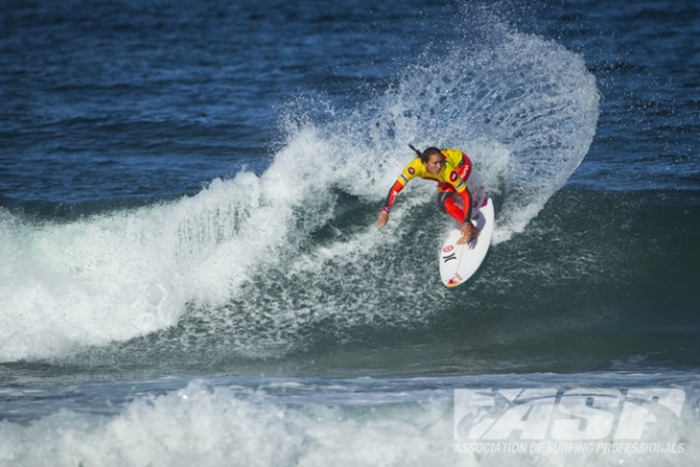 Moore, who clinched her second ASP Women’s World Title earlier in the day with the elimination of Tyler Wright (AUS), 19, in the Quarterfinals by Fitzgibbons, carried her momentum into the Final to collect her fourth elite tour victory of the season.

“Conditions got tough there in the end – no doubt,” Moore said. “I was still riding the high of clinching the world title and I think that momentum helped me push through in the end. Sally (Fitzgibbons) is such a strong opponent and I knew she was hungry for another win after last week in France. It’s been an incredible day for me though and an incredible year for the girls on tour. There are bigger and better things coming in 2014.”

Fitzgibbons, perennial threat to the ASP Women’s World Title, played a vital role in this season’s end-game, eliminating Wright in the Quarterfinals before making her way to the podium.

“Big day for women’s sport and a big finish to the season,” Fitzgibbons said. “Shame the conditions deteriorated for the Final, but congrats to Carissa (Moore) – she has been really impressive all year. Very happy with a strong finish to the year and I’m looking forward to next season with the huge commitment to women’s surfing from the ASP. It’s exciting times ahead.”

Sage Erickson (USA), 22, needed a win in Portugal to stay on tour for 2014. Although she came into the event as a lower seed, the young Californian put in a blistering performance, scalping top seeds with a powerful and stylish backhand approach. Her loss in the Semifinals to the 2013 ASP Women’s World Champion, however, would see her fall short of requalification.”

“I feel good,” Erickson said. “I backed myself coming into the final two events and feel like I surfed my best and delivered two strong results. It’s unfortunate that I couldn’t go a bit further or have better results earlier in the year, but my confidence is there. I feel like I belong on tour and we’ll see what next year brings.”

Coco Ho (HAW), 22, was in blistering form throughout the event but ultimately fell short to Fitzgibbons in their Semifinal bout.

“Super stoked with a 3rd here in Portugal and it’s one of my better results of the season,” Ho said. “I’ve won in Portugal before and I’m always comfortable here. It’s been an up-and-down year for me, but I’m happy to finish with a strong result and recharge for next season. Thanks to my family and sponsors for the support this year.”

Highlights from the EDP Cascais Girls Pro presented by Billabong will be available via www.aspeurope.com/edpcascais