SNOW: State of the Industry Video Breaks Down the 2012/13 Season 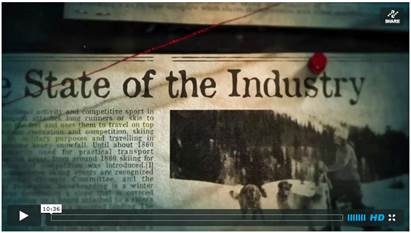 Washington, DC (October 8, 2013) -- The 2012/2013 snow sports season was a recovery year that started out slow and finished out strong with snow falling well into the spring in various parts of the country. $3.4B later with record sales in January 2013, the industry still has a lot of questions. In an effort to answer them, SIA research has released the third annual State of the Industry Video as well as category-specific videos for alpine skiing, Nordic skiing and snowboarding.

The State of the Industry Video tells the story how the 2012/13 season ended with:

- A participation increase of 11 percent over 2011/12
- $1.46 billion in apparel sales—a record high for the industry
- Alpine equipment retail sales at a five-season high
- The average snow sports shop selling more alpine boots than anything else

“The snowfall got a late start last season, getting underway after the Christmas holiday and that certainly had an effect on both participation and sales numbers,” commented Kelly Davis, director of research for SIA. “This video puts it all in perspective and can help all areas of the buying/selling process get prepared for the season ahead,” added Davis.

In addition to the videos, SIA's research department offers a full range of research and data reports that provide industry insights that give companies a competitive edge by helping them make smarter decisions, and ultimately growing their business. Stay up-to-date on the latest from SIA’s research team at snowsports.org/research and through SIA’s Facebook page or Twitter feed at #SIAdata.

SIA collects and analyzes all of its research, which ensures the information is relevant for the snow sports industry’s unique business needs including budgeting, product development or how to write a business plan. As a non-profit, member-owned trade association, SIA's goal is to help businesses thrive on their own and as part of the larger snow sports industry. Membership dues help subsidize SIA’s exclusive research, making the data available at no cost (i.e.: State of the Industry Video) or at significantly reduced pricing. Additional SIA research reports, including women-specific and juniors-specific snow sports products, will be released in the upcoming weeks.

For questions on SIA research services, please contact Kelly Davis, SIA's director of research at KDavis@snowsports.org or by phone at 703-506-4224.