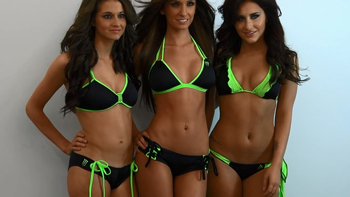 AURORA, Ill. (October 15, 2013) – Feld Motor Sports® announced today that Brittany Pattakos, of Litchfield Park, Ariz., has been selected as the 2013 Miss Monster Energy Cup. Pattakos will receive an all-expense paid trip to the Monster Energy Cup on October 19 at Las Vegas’ Sam Boyd Stadium to serve as the spokesmodel for this one-of-a-kind event.

“It’s an honor to have been selected as this year’s Miss Monster Energy Cup,” said Pattakos. “I am so excited to be the spokesmodel for this event. It’s going to be so exciting to see all of the top riders in the sport battle it out for the $1 million. I can’t wait to be there!”

Pattakos will hoist the 30-second board prior to each Main Event and will greet the top riders at the Monster Energy Cup at the winner’s circle. Pattakos will also get the chance to participate in various promotional events in Las Vegas the week leading up to the race. Fans will have a chance to get autographs and take pictures with Pattakos throughout the day on Saturday.

The search for Miss Monster Energy Cup started with 25 selected hopefuls across the nation and was narrowed down to three contestants before the final selection was made.

The Monster Energy Cup airs LIVE on recently launched FOX Sports 2 on Saturday, Oct. 19 at 9:00 p.m. ET., and the following day, FOX Sports 1, will re-air the entire race at 1:00 p.m. ET. The popular announcer team of Ralph Sheheen, Jeff Emig and Erin Bates calls the action as the world’s top supercross racers, including Justin Barcia, Ryan Villopoto, Chad Reed, James Stewart and Ryan Dungey, lay it on the line for a shot at a $1 million bonus on a fresh, new track designed by five-time Monster Energy Supercross Champion Ricky Carmichael.

Tickets for the 2013 Monster Energy Cup can be purchased at the Thomas & Mack Center Box Office, UNLVtickets outlets, online at www.UNLVtickets.com, www.MonsterEnergyCup.com, or by phone at (702) 739-FANS. Tickets will be available at the Sam Boyd Stadium Box Office on the day of the event only.