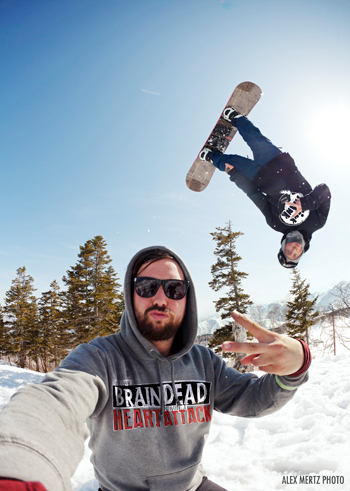 Venice, CA - October 16, 2013 - Arbor Snowboards is proud to announce that they have hired from within bringing team rider, Sean Black up through the ranks to the position of Marketing Coordinator for the brand.

Prior to accepting this new position, Black spent seven years building his career as a professional snowboarder in Salt Lake City, Utah which included the last three years on the Arbor Snowboards pro team. While Black was working on full parts in three consecutive Think Thank snowboard movies, he was also earning a bachelor’s degree in Strategic Communications from the University of Utah.  In addition to his career as a professional snowboarder, Black has engaged with the snowboard community as a coach, judge, announcer, writer, and overall personality.

Black will draw upon his insight into the snowboarding community as he takes on a principal role in helping with the coordination and implementation of Arbor Snowboard’s marketing initiatives including media outreach and team management.

“Sean Black is the only rider I ever recruited on to the Arbor team,” says Arbor’s Strategic Marketing Advisor, Brad Farmer, “and I did so because, at the time, we needed a motivated, well respected, intelligent rider with a larger than life personality to help lead our team. Now that he has completed his education and earned a degree, we have an amazing opportunity to hire from within and bring him onto our marketing team. I believe that Sean’s solid understanding of snowboarding and his natural ability to foster relationships make him a great new addition to help execute our marketing strategy moving forward.”

“I’m very excited to branch out in my career by planting a seed at the Arbor Collective’s headquarters in Venice, CA.,” said Black.  “As I grow roots with the brand, I think it is fair (trade) to say that we all expect a lot of positive things to come from the partnership. My connection to the snowboard community in Utah is as solid as the reclaimed Koa wood Arbor uses to create their topsheets. I would loved to stay in Utah but in the end I knew that it was the right decision to make like a tree and leaf.”

ABOUT THE ARBOR COLLECTIVE
An expanding cooperative of athletes, designers, artists and friends, whose shared mission is bringing together forward thinking design, progressive technology and thought provoking art with the most sustainable production solutions available. For those of us who snowboard, skate, surf or simply thrive on getting outside, protecting the planet is about the environments we use everyday.  To that end, the Arbor Collective continues building on an 18-year legacy of supporting the experience with the most environmentally responsible, next-level product possible.