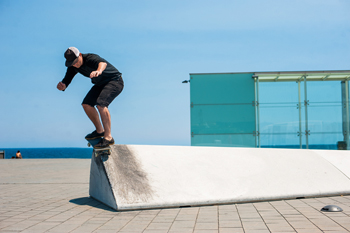 CARLSBAD, Calif., Oct. 22, 2013 – GrindMedia is pleased to announce the appointment of Jaime Owens as the new Editor in Chief of TransWorld SKATEboarding (TWS), the number one skateboarding media brand in the industry. As Editor in Chief, Jaime will be responsible for maintaining TransWorld SKATEboarding’s strength and industry relevance by guiding initiatives on all print and digital platforms.

"I couldn't be more excited to join such a legendary brand and help to continue to make great skateboarding content with this talented staff," said Owens.

Prior to taking the helm at TWS, Owens served as the Editor in Chief of Skateboarder Magazine for the past five years and worked at the publication for 13 years in total.

“Jaime Owens is an incredible addition to the TransWorld SKATEboarding team,” said TWS Publisher Monica Campana. “Jaime’s work within the industry extends itself into multiple areas of relevance, influence and expertise.  Jaime is a solid individual with a sincere love of skateboarding.  We all are excited and proud to have him on our team.”

TransWorld SKATEboarding is the largest reaching media property within the skateboarding landscape and intends to build on that momentum and growth. With the combination of the largest print reach, digital, web, mobile and events, the TransWorld SKATEboarding brand has significant influence and strength within the industry.  A site redesign, multi-channel syndication efforts, a new European partnership with Factory Media (Sidewalk, Kingpin) and an increased team of videographers worldwide has extended the brand’s scope even more.