Snow Sports Get a Healthy Start to the 2013/2014 Season, Inventories are lean and sales are up
Press Release from SnowSports Industries America (SIA)

Snow sports retailers sold $305 million worth of apparel, accessories and equipment during August and September this year, up 3% compared to the same period in 2012. Retailers host tent sales and back-to-school sales during this period and typically use these pre-season sales to move carryover inventories and make room for the product they will sell at full margin this season. 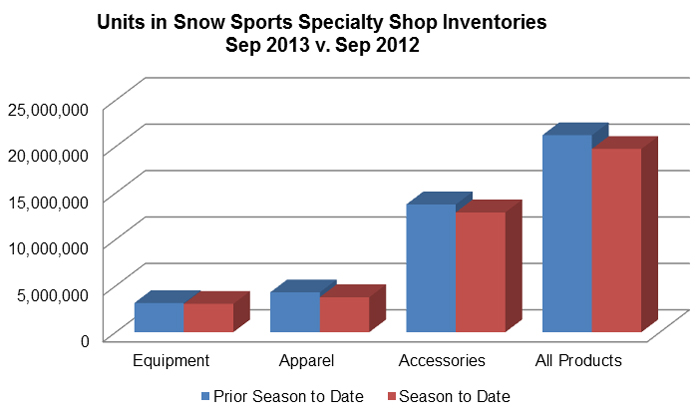 Online sales totaled $98.5 million up 15% in dollars sold but sales are down 5% in units sold through September.

The market data presented in this report comes from the Snow Sports RetailTRAK™ produced for SIA by Leisure Trends, and NDP Group Company. Leisure Trends gathers RetailTRAK™ data directly from the Point of Sale systems of more than 1,200 snow sports retailers.

Finally, in case you missed it, SIA has created an entertaining and informative video summary of the snow sports market, don’t miss the State of the Snow Sports Market Video.

SIA releases the topline results for snow sports retail seven times each season from November to May covering results of retail sales made between August 1 and March 31 each season. Topline/category retail sales data for the snow sports market is available as a member benefit to all SIA members. In addition, you gain free access to topline data for the Running, Outdoor and Paddle Sports when you register. The topline data is accessible on a 24/7/365 basis on Leisure Trends Cross-Industry RetailTRAK™ data portal. Non-SIA members may subscribe to the topline portal for just $375 per year.