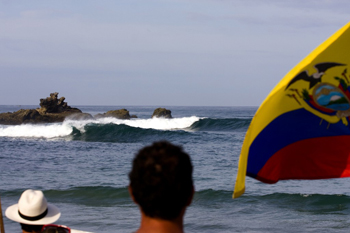 Over 300 Of The Best Junior Surfers In The World Will Gather In Salinas, Ecuador To Compete For Gold Medals And The ISA World Junior Team Champion Trophy
Press Release from ISA

The World's best Junior surfers (under 18) will gather at the beaches of Salinas, Ecuador, to compete for the ISA World Junior Team Champion Trophy and individual Gold Medals.

This is the 4th ISA World Championship to be held in Ecuador over the last decade, and the ISA's largest event of the year. The most important Junior surfing event in the world has the full support of Ecuador's President, Rafael Correa, and the country's Ministries of Tourism and Sports, as well as the Ecuadorian Surfing Federation (FES).

"We are incredibly excited for the ISA World Junior Surfing Championship to return to Ecuador and watch the best young surfers from all over the globe compete in the world-class waves of Salinas," said ISA President Fernando Aguerre. "Over the last ten years, it's been exciting to watch the sport of surfing grow exponentially in Ecuador due to media exposure from ISA World Championships held there. I am looking forward to enjoying the country's amazing waves and the wonderful hospitality of Ecuador's President Rafael Correa, the Ministries of Tourism and Sports, the Ecuadorian Surfing Federation (FES), and its warm and welcoming people. I know this will be an incredible event."