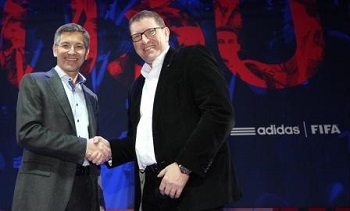 adidas and FIFA Renew Agreement Through 2030
Press Release from adidas

FIFA and adidas formally announced an extension of their long-term partnership agreement granting adidas the Official Partner, Supplier and Licensee rights for the FIFA World Cup and all FIFA events until 2030. The extension continues one of the longest and most successful partnerships in modern sports marketing history.

The announcement was made during a ceremony in Moscow by Thierry Weil, FIFA Marketing Director and Herbert Hainer, adidas Group CEO. FIFA and adidas have been partners since 1970. This strategic commitment to the FIFA World Cup ensures extensive adidas presence at the world's most watched sports event until 2030.

The FIFA/adidas partnership represents far more than an event sponsorship or licensing agreement. adidas contribute significantly to FIFA’s aim to develop football all over the world by supporting initiatives such as FIFA Goal and the FIFA Football for Hope adidas Exchange Programme. Through FIFA Goal, adidas and FIFA have made more than 150,000 FIFA Goal balls available to football federations striving to develop football in their countries since 2008. Both partners will continue to provide FIFA Goal balls for this programme as part of the extended partnership.

At the same time, adidas will continue to support FIFA in its Football for Hope adidas Exchange Programme by organising workshops and coaching seminars specifically targeted to the needs of community-based organisations. Both programmes are key initiatives within FIFA’s social responsibility strategy, which aims to promote the use of football as a tool for social development.

“Without the support of long-term partners such as adidas, it would simply not be possible for FIFA to host global spectacles such as the FIFA World Cup and to continue our work to develop football worldwide,” said FIFA Marketing Director Thierry Weil. “adidas is an integral part of the FIFA World Cup story, quite literally featuring at the heart of the action at every tournament since the 1970 FIFA World Cup. We are delighted that this long-term strategic partnership will continue until at least 2030 and we are looking forward to writing new chapters of football history together.”

adidas CEO Herbert Hainer said the extension of the agreement was a natural step for the world's largest soccer brand.

“Over the last 40 years, adidas and FIFA have worked closely together to develop football worldwide," Hainer said. "Therefore, it was a natural step for us to extend one of the most successful partnerships in the history of sports marketing. We are happy and proud that our close relationship with FIFA will continue. This unique partnership and our extensive presence at all FIFA World Cups will help us to expand adidas’ position as the leading football brand worldwide."