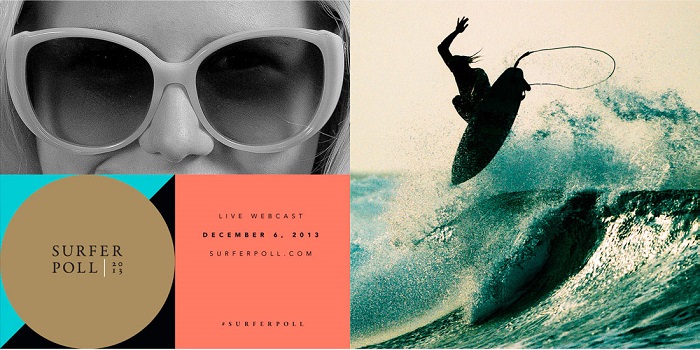 SAN CLEMENTE, Calif. — With just over a week until the biggest night in surfing, SURFER Magazine is pleased to announce the 2013 SURFER Poll video nominees.

Every year, SURFER Magazine pores over the films and shorts produced in the previous calendar year, and narrows down the best movies and performances. This year, there were so many noteworthy sessions and performances caught on tape, we've expanded the number of nominees in several categories to accommodate.

Also this year, for the first time in SURFER Poll history, we opened up the Worst Wipeout category to our SURFER readers, allowing them to vote online for the most harrowing wipeout and ultimately choose the winner.

Here are the 2013 SURFER Poll nominees:

The 2013 SURFER Poll, which will be broadcast live from Turtle Bay on Dec. 6 beginning at 7 p.m. HST, will also include awards for the Top 10 Men and Top 5 Women, as well as A.I. Breakthrough Performer and Agent of Change.

Working media are invited to attend and cover the event. To request attendance, complete the credential request form at surfermag.com/surfer-poll/surfer-poll-media-credentials/.

About SURFER
In 1960, SURFER Magazine began as the original. After a long history of delivering provocative and insightful editorial features, revealing interviews and award winning state-of-the-art photography, SURFER remains the authoritative voice of the surfing world and thus earned the moniker "the bible of the sport." The SURFER brand has also grown to include Surfermag.com, Fantasy Surfer, and the SURFER message boards. All of these assets combine to make the SURFER network the most current and reliable channel of information to the surf community. The magazine is published by Source Interlink's GrindMedia, which reaches more than 22-million active sports enthusiasts through an integrated network of magazines, online properties, events and television programming. To learn more, visit surfermag.com.