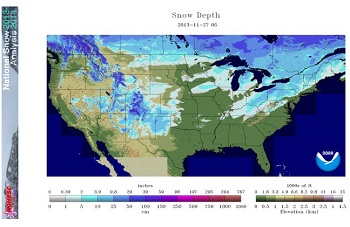 November snow sports retail sales increased 13 percent in units sold and 14 percent in dollars compared to November 2012, reaching $1.2B season to date (August to November), $83M more than was spent the same time last season. This is a welcome turn-around early in the holiday shopping season after two seasons of sparse snow and warmer than average temperatures in November.

In fact, the National Climate Data Center reported that average temperatures in the contiguous United States were below the 30-year average and there were nearly three times as many record cold daily highs and lows in November. In late November (measured on November 27), 36 percent of the contiguous United States had snow cover compared to 20 percent in November 2012. This led to early resort openings. In fact, many had the earliest opening dates in more than a decade. Colder temperatures, snow and an opportunity to enjoy skiing and snowboarding early combined to drive the snow sports market in a decisively positive direction.

SIA releases the top line results for snow sports retail seven times each season from November to May covering results of retail sales made between August 1 and March 31 each season. Topline/category retail sales data for the snow sports market is available as a member benefit to all SIA members. In addition, you gain free access to topline data for the Running, Outdoor and Paddle Sports when you register. The topline data is accessible on a 24/7/365 basis on Leisure Trends Cross-Industry RetailTRAK™ data portal. Non-SIA members may subscribe to the topline portal for just $375 per year.