SUPPORT: Transform Your Community with the Sheckler Foundation's 2014 Be the Change Initiative 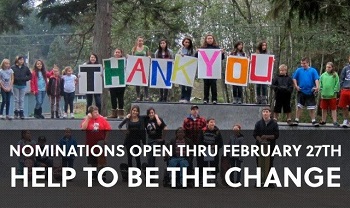 January 27, 2013 (San Clemente, CA) – The Sheckler Foundation has launched its site as a platform for people to upload entries for its second “Be the Change” initiative. From today through February 27, individuals can upload an entry of how they would like to benefit the lives children or injured action sports athletes.  Once all the nominations are received the top four will be announced on the shecklerfoundation.org site, and voting will be opened up to everyone.  Click here for all the details on how you can participate: http://www.shecklerfoundation.org/take-action/be-the-change.

Sheckler Foundation’s CEO, Gretchen Sheckler-Hachee says, “We are so thankful that the Sheckler Foundation’s supporters rallied together to make the initial ‘Be the Change’ project a reality.  With this contest, people have the power to decide which organizations’ speak to them and it’s such a blessing to empower others to help those in need.”

The first “Be the Change” initiative in 2012 received hundreds of nominations of plans individuals and organizations wanted to see in their communities. The Sheckler Foundations social network was activated and the Native American Port Gamble S’Klallam Tribe’s project received the most votes for their plans to build a skatepark on their reservation in Washington State.  Among the Native American Port Gamble S’Klallam Tribe community, local businesses donated their resources to help the cause and take steps to “Be the Change” within their community.

Having helped the A.Skate Foundation provide free skate clinics for children with Autism, Ricki Bedenbaugh with medical bills for his severe head trauma, the Port Gamble S’Kallam Tribe’s youth center in building a skatepark for the kids, and many others the Sheckler Foundation is on a mission to help “Be the Change.” Check out this video to hear about the positive impact the Sheckler Foundation and its supporters have made: https://www.youtube.com/watch?v=sSTh0FoJ-aY.

About The Sheckler Foundation
The Sheckler Foundation was established in 2008 as a way for Ryan, his family, friends and business associates to give back to the community and action sports industry they love. Our mission is to support great causes that directly benefit and enrich the lives of children and injured action sports athletes, inspiring them to “Be the Change!”