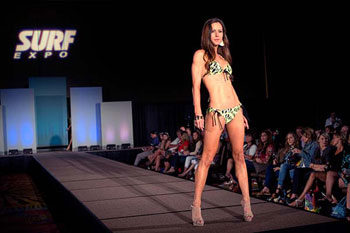 “Providing new and enhanced ways to bring more value to our customer base is a priority for Emerald Expositions,” commented CEO David Loechner. “The acquisition of GLM has expanded the scope of our resources to identify and develop targeted cross-marketing initiatives for our exhibitors and attendees that speak to specific market needs. This co-location is one such example.”

Surf Expo, held semi-annually each January and September in Orlando, FL, is the largest and longest running board sports and beach/resort lifestyle tradeshow in the world. Last September's Surf Expo attracted the largest attendance in the show's 38 year history, and again drew very strong attendance at the January Surf Expo last month.

Roy Turner, Show Director, Surf Expo said, “We are excited to be co-locating with ISS this September. For years, t-shirts have been a mainstay in the product offerings of our exhibitors and attendees. From souvenir & resort to board sports, imprinted sportswear has been and continues to be the backbone of brand identity.”

For more than 30 years, Imprinted Sportswear Shows (ISS) has been the place to see the latest technologies, hottest trends and newest products in the decorated apparel industry. The ISS Orlando 2014 show was originally scheduled to be held April 3-5. However, when the opportunity presented itself to expose ISS Orlando exhibitors and attendees to an incremental and well qualified, audience of nearly 25,000 by co-locating with Surf Expo, the decision was made.

Jeff Brown, ISS Show Director stated, “We are very excited to bring ISS Orlando and Surf Expo together this year for the first time.  There has always been a great synergy between our groups with crossover within the resort wear and gift sections of our shows.  From beach transfers on t-shirts to sublimated designs on surf boards, you will be able to see everything on display with this collaboration between ISS and Surf Expo.”

Surf Expo and ISS Orlando are also pleased to announce show badges will allow attendees entrance to both show floors with no additional cost.

“Being able to offer the full production cycle to Surf Expo customers is a big win for us; from art, to production, to finished product, our buyers and exhibitors will benefit from the additional resources that ISS supplies,” Roy Turner added.

About Imprinted Sportswear Shows (ISS)
ISS is the largest trade show dedicated to the decorated apparel industry. Located nationwide, attendees who primarily screen print or embroider on t-shirts, sweatshirts, hoodies, baby apparel, bags and more, will find the best selection of vendors for supplies and screen printing equipment. Attendees will see live demonstrations of apparel screen printing, embroidery and digital printing directly to the garment (DTG) equipment and specialty products such as performance stretch inks and glitter threads at ISS apparel trade shows. The 2014 locations include Long Beach, Atlantic City, Nashville, Las Vegas, Orlando and Fort Worth. For more information, visit ISSshows.com and find us on Twitter @ISSshows, Facebook and LinkedIn. All ISS shows are open to the industry/trade only.

About Surf Expo
Surf Expo is the largest and longest running board sports and beach/resort lifestyle tradeshow in the world. Produced in January and September, the show features more than 2,300 booths of apparel and hard goods and draws buyers from specialty stores, major resorts, cruise lines and beach rental companies from across the U.S., and more than 69 countries. Voted The Fastest Growing Show in the US by TSNN, Surf Expo hosts a full line up of special events, demos, fashion shows, and annual award ceremonies. For more information visit www.surfexpo.com. All shows are open to trade only.

About Emerald Expositions
Emerald is a leading operator of large business-to-business tradeshows in the United States, producing more than 85 tradeshows and conference events per year connecting over 525,000 buyers and sellers across ten diversified end-markets, including gift, home and general merchandise; sports; hospitality and retail design; jewelry, luxury, and antiques; e-commerce; photography; decorated apparel; building; healthcare; and military. Emerald is headquartered in San Juan Capistrano, California. The company’s shows are typically the most prominent and important for exhibitors and attendees within their various industries. For more information on Emerald, please visit www.emeraldexpositions.com.