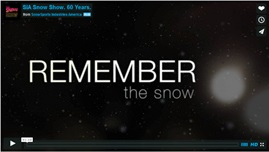 “This report is designed to provide the snow sports industry with actionable intelligence about sales and participation trends during the season while the snow is still falling and participants are active,” said Kelly Davis, SIA’s research director.

The Mid-Season Intelligence Report is a key information resource for suppliers, retailers, reps, entrepreneurs, financial analysts and students, giving them a comprehensive view of the snow sports market and a detailed view of each category and market channel. The report may be used to compare pricing, retail margins, unit and dollar volume by channel, regional sales, inventories and market penetration. Snow sports entrepreneurs find the report particularly useful when developing business plans and all snow sports businesses may use the report to provide a backdrop on the industry when seeking initial or additional financing. Students have also used this report extensively for various reports and projects in their business, social science and a variety of other class projects.

The 2013/2014 Mid-Season SIA Snow Sports Market Intelligence Report is available at no cost to SIA Members, $425 to non-members and $50 to students.

To receive a copy of this year’s report or for more information about snow sports retail sales information and other SIA Research products including the State of the Industry Videos, Snow Sports Participation Study, Revisiting Growing the Snow Sports Industry and more, contact Kelly Davis, SIA's Director of Research, at KDavis@snowsports.org or by phone at 703-506-4224.