La Jolla, California, February 27, 2014 – The International Surfing Association (ISA) is excited to announce the third annual ISA World StandUp Paddle (SUP) and Paddleboard Championship (WSUPPC) to take place at two different locations this year in Nicaragua, from May 3rd to May 11th. The SUP Surfing portion will take place in the ocean at La Boquita on the west coast of Central Nicaragua, while this year’s SUP and Paddleboard flatwater Racing portion will be held on the northwest area of Lake Nicaragua in Granada, which is the oldest colonial city of the country.

“As SUP continues to evolve and still reign as the fastest growing sport, not just within surfing, but of all sports around the world, we are excited that Nicaragua will host this year’s World Championship at two different venues,” said ISA President Fernando Aguerre. “The universal accessibility of the sport allows the ISA to host this year’s championships in both the Pacific Ocean and on Nicaragua’s beautiful Lake Nicaragua. Nicaragua is a wonderful host country. Although it’s a small nation in Central America, its rich coast is full of waves, offshore winds, and gracious people. I am especially thankful to President Ortega for his continued support of the development of SUP and Surfing in his country and around the globe.”

More than 150 of the world’s greatest watermen from over 25 countries will compete in 11 different disciplines in the Men’s and Women’s divisions for the Club Waikiki-Peru ISA World Team Champion Trophy and individual Gold Medals. The 2014 World SUP and Paddleboard Championship will include Men’s and Women’s SUP Surfing, SUP Technical Race, SUP Distance Race, Paddleboard Technical Race, Paddleboard Distance Race, and the Team Relay Race, for featuring both men and women. 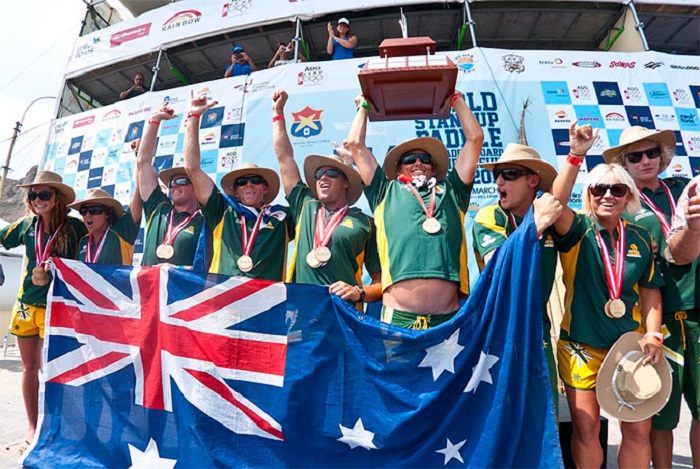 This year’s competition will see an increase in team size for the ISA WSUPPC. In the past, there was a maximum of nine athletes in three divisions – SUP Surfing, SUP Racing and Paddleboard Racing. Each division allowed for a maximum of 3 athletes – 2 men and 1 women per division. Because many SUP Racers competed in both the long distance and technical race (shorter course with many turns around buoys), this was an appropriate allotment. However, as the sport has evolved and SUP technical racers have developed differently than long distance racers, the ISA has increased overall team size from 9 to 12 athletes this year, adding 2 men and 1 woman SUP technical racers to each team. “Just as long distance runners compete in different events than shorter distance runners, we can now watch SUP athletes compete in their top discipline,” said Aguerre about the well-received change.

This year’s team to beat is Team Australia. At last year’s World Championship, the Australian team won seven Individual Medals plus the Gold in the Team Relay Race, and the overall Team Gold Medal Trophy.

ISA membership includes the surfing National Governing Bodies of 79 countries on five continents. Its headquarters are located in La Jolla, California. It is presided over by Fernando Aguerre (Argentina), first elected President in 1994 in Rio de Janeiro and re-elected seven times since. The ISA’s four Vice-Presidents are Alan Atkins (AUS), Karín Sierralta (PER), Debbie Beacham (USA) and Layne Beachley (AUS).

About Liv Nicaragua:
Liv Nicaragua is the commercial name of Tourism and Investments Corporation (TURIN S.A.)  a company formed by professional experts in tourism and real estate of recognized prestige and experience in Nicaragua and Central America.  It is dedicated to promoting Nicaragua as an attractive destination for investment, tourism, world class sports events and as one of the most competitive destinations for those looking to retire or have a second home. It specializes in advicing responsibly and professionally those interested in investing or retiring in Nicaragua, providing them with an attractive portfolio of high quality projects.

The Executive President of TURIN S.A is Lucy Valenti, who has had a renowned career and leadership in the Tourism industry of Nicaragua and Central America. She has held the Presidency of the National Chamber of Tourism of Nicaragua (2006-2011), the Vice Chair of the Superior Council of Private Enterprise of Nicaragua (COSEP 2006-2011), the deanship of the Faculty of Tourism and Hotel Management of the American University (UAM) of Nicaragua and the position of Secretary General of the Central American Tourism Integration system (SITCA) among other responsibilities. Also, organizer of the Latinamerican Surfing Circuits (ALAS) for the past four years, the 2012 ISA World Masters Surfing Championship, and the 2013 ISA World Junior Surfing Championship in the country. Currently she is President of Nicaragua’s Business Women Network (REN), Secretary of the Board of Directors of COSEP and Vice President of the Nicaraguan Association of Investors and Developers (ANID) .

About INTUR:
The Nicaraguan Tourism Institute is the Government institution in charge of developing tourism in the country and promoting Nicaragua as a new and emerging tourism destination. For more information: www.visitnicaragua.us or www.intur.gob.ni”