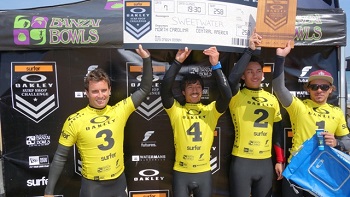 KITTY HAWK, NC, April 14, 2014 – Eleven teams gathered last weekend at Kitty Hawk, Outer Banks, North Carolina to battle for a trip to the National Championship of the Oakley Surf Shop Challenge at a yet undisclosed location in Central America. Eckner Street greeted competitors with clean and contestable one-to-three-foot surf with nippy water conditions. Picture perfect weather in the 70s were enjoyed by spectators and teams alike, as performances were nothing short of very entertaining for all.

The Oakley Surf Shop Challenge's format is very unique allowing two shop employees and two shop team riders to formulate their "team" working together as they compete against other shop teams in a one-hour heat only allowing three waves per rider. Each team is granted a "double whammy" guy allowing one score to count twice, they each have a tent or "box" they cannot leave in that hour and all must return before the heat horn sounds or a 5 point deduction is taken off of their total heat score. Every rider and score posted is crucial for their overall score, making this format a competitor and crowd favorite alike. After three heats total, four teams battle it out in the Finals hoping to secure their free ride into the national showdown.

Heat one showed team Whalebone looking solid until the latter part of the heat where team Duck Village Outfitters's Juan Carlos dropped a solid 8 on his backhand with a backup score from double whammy surfer Jeffrey Myers celebrating a victory with heat totals as follows: 28.61 to 25.84.Heat two saw a close battle with OBBC taking the win and Surf City securing second place 22.44 to 21.86.In heat three, reigning champs Sweetwater Surf Shop took the nod as competitive elite Ben Bourgeois practically double whammied the team straight into the Finals.

"Conditions for the Finals were extremely tough with small and inconsistent surf,” said event standout and Finalist Juan Carlos. “Everyone had a great vibe in the water and we performed to the best of our abilities".

With Mother Atlantic literally taking a 30-minute siesta in the Final, very few scores were given as the clock ticked away proving this Final would be won on strategy rather than sheer performance.

Sweetwater's Benny B dropped a high 8 to be double whammied, stirring the pot with little to any time left for an honest rebuttal.

With under five minutes remaining, DVO's Jeffrey Myers threw in some tactical defense on both team 17th Street and team Whalebone with only one chance to match Benny B's 8,a low seven was double whammied falling just short of the score needed to take down the defending champs!

"Definitely some tough conditions but we just stuck to our game plan and at the end of the day it worked out,” said Sweetwater’s Benny B.“Tag team can be tricky, and you can't be too greedy, so we just made sure whoever was in the water tried to keep checking the tent and do what the team was telling them. We even made some guys paddle in to save time. There were some really good teams but at the end of the day, I think we played a smart heat and got the W!"

About Surf Shop Challenge
Originally conceived to provide a fun and competitive format for the hardcore surf shop riders, the SURFER Shop Team Challenge was one of the most popular and exciting Southern California contests of the early 1980s.  Through the years the contest has evolved, growingintoseven qualifying regional events around the country and culminating ina national championship abroad. The underlying principles, however, have remained the same. The Oakley Surf Shop Challenge is still about giving back to the shops, the true backbone of the industry and the heart of the sport of surfing. Each year the competition level rises, the stakes become greater and the prizes become bigger.