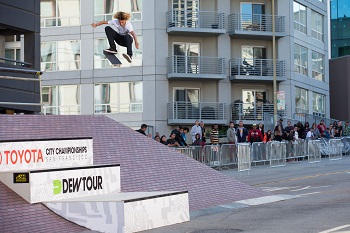 Burr Ridge, Ill. – May 5, 2014 - Celebrating its ten-year anniversary, the Dew Tour will kick off in Ocean City, Md. for the fourth year, followed by streetstyle-focused stops in Portland, Ore. and Brooklyn, N.Y., Alli Sports, a division of the NBC Sports Group, announced today. The Dew Tour will lead the industry with 28 hours of coverage across the NBC Sports Group, including live coverage on NBC and NBCSN.

The Dew Tour schedule sees the addition of a third summer event to the 2014 schedule, developed in response to the success of the streetstyle events for skateboarding. For the fourth consecutive year, the Dew Tour will begin the season in Ocean City, Md., home of the Dew Tour Beach Championships. The five day event will take place June 25-29, and feature the world’s best athletes in the sports of skateboard.

The Toyota City Championships in Brooklyn will be held September 20-21, and will feature street and streetstyle events. The world famous House of Vans Brooklyn, will serve as the venue for the BMX and skateboard street competitions. The competitions will feature courses inspired by iconic NYC skate spots, and will provide athletes with the chance to showcase their creativity and technical skills in an authentic street event. Courses for the two Toyota City Championships streetstyle focused events will be designed and constructed by renowned California Rampworks. In addition, skate industry insiders Rob Meronek and Ryan Clements will serve as Sport Directors for the street and streetstyle events. They will work with the Dew Tour to determine the direction of the disciplines over the course of the year, from course design to on-site competitions.

"The House of Vans Brooklyn is a cultural hub for the community and we're really proud to open it up in a big way this year as a partner of the Dew Tour’s first-ever New York event," said Steve Van Doren, Vans vice president of events and promotions. "We're excited to reunite with the Dew Tour and look forward to hosting top skateboarders, BMX riders and musicians at the House of Vans Brooklyn."

The Dew Tour schedule will incorporate specific sports and disciplines at each stop:

DEW TOUR ON NBC SPORTS LIVE EXTRA: NBC Sports Live Extra— NBC Sports Group’s live streaming product for desktops, mobile devices, and tablets — will provide live comprehensive streaming coverage of the Dew Tour via “TV Everywhere,” the media industry’s effort to make quality content available to authenticated customers both in and out of the home and on multiple platforms.

Coverage will live stream to PCs, mobile devices and tablets through NBC Sports Live Extra, and to the digital platforms of participating cable, satellite, and telco services, via “TV Everywhere,” which is available on an authenticated basis to subscribers of participating MVPDs.

Dew Tour
The Dew Tour consists of four marquee events, featuring disciplines across BMX, skateboard, freeski and snowboard (superpipe and slopestyle), with additional competitions integrated throughout the year. Dew Tour events are premium action sports and lifestyle festivals combining the best in action sports competitions along with the Dew Tour Experience, live music performances and lifestyle showcases. The Dew Tour is broadcast live on NBC and NBCSN and streamed live on dewtour.com. The Dew Tour is also distributed on Universal HD, and internationally on TVA and Globosat. Dew Tour partners include Mountain Dew (tour title sponsor), iON, Toyota, Paul Mitchell and Squatch. More information can be found at www.DewTour.com.

Alli Sports
Alli Sports, a division of the NBC Sport Group, is a media, event and branded content company that specializes in action, adventure, and adrenaline based sports.  Alli properties include the Dew Tour, Lucas Oil Pro Motocross Championship, the Red Bull Signature Series and World of Adventure Sports presented by Go Pro.   More information can be found at www.Allisports.com.