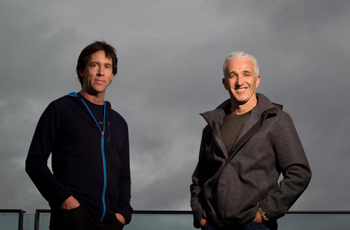 Auckland, New Zealand (May 27, 2014) – Icebreaker, the New Zealand brand that pioneered outdoor merino wool apparel, today announced the appointment of Rob Fyfe as Chief Executive Officer. For the past 9 months Rob has been Executive Chairman of the Board for Icebreaker, working alongside company founder Jeremy Moon to grow the brand into a world-class omni-channel business.

In the new corporate structure - set to take effect June 2 - Jeremy has chosen Rob to succeed him as CEO and will take on the position of Executive Chairman & Creative Director. The move is designed to capitalize on Rob’s extensive experience at the helm of a global business and Jeremy’s visionary product and creative expertise.

“I am really delighted we have secured Rob Fyfe as the new CEO of Icebreaker,” says Jeremy Moon. “His proven strengths as a game-changing CEO will align perfectly with the global goals we’ve set forth as we move toward record growth in future years in an increasingly competitive landscape.”

“It was a big decision for me to hand over our business to another CEO, but I’ve seen Rob’s passion for what we are building at Icebreaker and I really admire his skills, especially with people.  In the end, it was easy for me to put my total trust in Rob.” says Jeremy.

Rob, who has been on Icebreaker's board since 2012, was most recently the CEO of Air New Zealand, where he was credited with driving a historic turnaround in the airline's strategy and culture and maintaining profitability during economic downturns.

“For the past 19 years, Icebreaker has truly excelled in establishing the merino wool category for outdoor apparel by leading exceptional product innovation while building the cleanest clothing company on the planet,” says Rob. “I am excited and honored for the opportunity to lead this incredible team towards the next stage in the company’s evolution.”

Over the past few years, Icebreaker has been evolving to become a multi-channel integrated business with 19 company-branded retail stores, over 4000 wholesale customers, direct eCommerce and over 400 employees worldwide. Sales have tripled in the last 6 years with sales projected to exceed $200m in 2014, with 80% of these sales now in Europe and North America. The company is committed to a business model that doesn’t put profits ahead of the environment and is seeking to double sales within the next five years through global expansion across all channels.

About Icebreaker
Icebreaker merino clothing for the outdoors, technical sports and lifestyle includes underwear, mid layer garments, outerwear, socks and accessories for men, women and children. Icebreaker has seven offices across Europe, and North America, and the head office is based in Auckland, New Zealand.  Icebreaker is sold in more than 4000 stores in 44 countries. See icebreaker.com for more information about Icebreaker, and jeremymoon.me for more information on Icebreaker founder Jeremy Moon.  Follow Icebreaker on: Facebook, Twitter, Instagram, Pinterest.