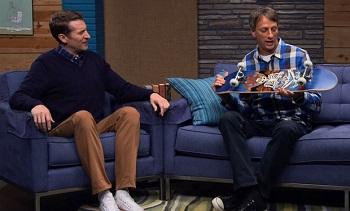 Tony Hawk is the most famous pro skater in the country. He can ollie, backflip, McTwist, mongo foot and nosegrind in a goofy foot stance with the best of them. But just because he can do every trick in the book — and invent new ones to boot — doesn’t mean that he knows how to do everything when he’s not on a skateboard. But no one ever need to know that, because Tony Hawk is basically the Tony Hawk of secretly using a professional stunt double.

We are shocked to find out that Tony Hawk, one of the world's most famous skateboarders, uses a stunt double on a daily basis! But it's not for what you think, as pedestrian tasks such as walking and talking are his biggest challenges.

For continued updates on Comedy Bang! Bang!, please check out: