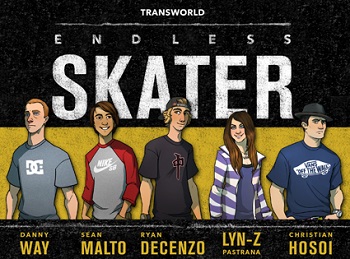 Players can use touch controls or iOS 7 and Android controllers such as the MOGA Ace and Moga Pro Power, to master dozens of tricks and countless combos. MOGA controllers provide a familiar set of console-style controls to play TransWorld Endless Skater at the highest level possible. The game also features an original soundtrack from Los Angeles-based independent record label No Sleep Records and includes songs from bands such as Major League, Broadway Calls, and The Swellers.

"It's been a great experience working with SuperVillain Studios and TransWorld SKATEboarding on the TransWorld Endless Skater game." says Sean Malto “It's so fun and really is the best mobile skateboarding game yet!”

“As the leaders in the skateboard media space, we’re excited to partner with SuperVillain Studios on the release of TransWorld’s Endless Skater gaming app,” said TWS Editor in Chief Jaime Owens. “This innovative game will reach both skateboarders and non-skaters worldwide, exposing the TransWorld brand to new skateboarding enthusiasts on a global scale. This game will also bring extra value to our partners and our audience.  And it’s really fun to play.”

About SuperVillain Studios
Founded in 2004, SuperVillain Studios is bent on CONQUERING THE WORLD! It’s a daunting task, to say the least, so we also happen to develop videogames! Powered by the company’s proprietary Automaton Engine, the SVS team has created a wide variety of games, ranging from original works, to major licensed properties. Our team is composed of experienced developers who hail from well-known companies such as Neversoft™, Blizzard™, and EA™, as well as talented young developers from programs such as Full Sail University™, The Art Institutes™, and Animation Mentor™. For more information, please visit http://www.svsgames.com or find us on Facebook and Twitter!