Element Founder and President Johnny Schillereff once said “I always think I am the dumbest guy in the room, but I like it that way – because my greatest successes have come from taking risky action that in retrospect seemed naïve, foolish or even stupid.” 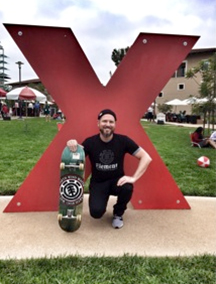 It was that philosophy that he demonstrated to the sold out audience at TEDx Orange Coast, where he took this year’s theme of “Tipping Point” and literally turned it upside down with the assertion that “there are no tipping points.” Schillereff illuminated his contrarian theory with anecdotes featuring his creativity by skateboarding and drumming that resulted in a standing ovation from the assembled guests.

As he concluded, “starting anything is easy, but you know you’ve found your calling when stopping is more difficult.” View his inspirational talk here and find out how he was able to ‘clear the gaps’ in his life to land on his greatest win - becoming the creator of one of the leading premium brands rooted in skateboarding.