Less than two months after the doors closed on the second American International Motorcycle Expo (AIMExpo) in October, the show continues to demonstrate incredible growth with the announcement that 200 companies have already renewed or signed on to exhibit in 2015. 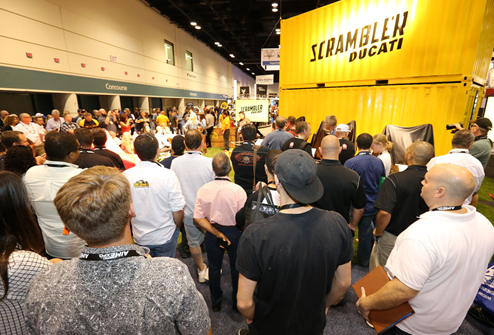 The excitement generated by the show’s progression translated directly into greater interest from exhibitors, who wasted little time in securing their spot in 2015 during the recent renewal period. As a result, AIMExpo has already achieved 40 percent of its exhibitor total from 2014 less than 50 days following the show. 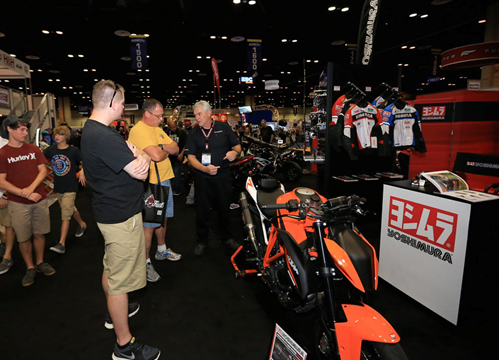 Yoshimura will be returning for its third year in 2015

The second ever AIMExpo was a showcase of growth for both the industry and the show itself, further establishing the Orlando event as the premier industry trade show in North America. The addition of marquee exhibitors like Ducati, Kawasaki and Western Power Sports contributed to AIMExpo surpassing the 500 exhibitor mark, a growth of 28 percent, while more global and domestic product introductions, and additional demo opportunities at AIMExpo Outdoors!, ultimately resulted in a significant 27-percent increase in trade attendance and an incredible rise in consumer attendance of 43 percent.

"The overwhelmingly positive response from renewing companies and new exhibitors alike is a clear indicator that the market has spoken in favor of Orlando in October," said Mike Webster, Marketplace Events Trade Show Division President. "The AIMExpo platform significantly spread its wings this year and is now the largest show of its type in North America. What's even more exciting are the continued growth opportunities we see for 2015 and beyond."

AIMExpo’s recent announcement of a purpose-built showcase of homegrown brands and products known as Made in America is a sign of the growth opportunities that lie ahead, which will continue to expand as the progression towards the event’s third year ensues.

Booth space allocation for the 2015 AIMExpo will begin in January with selection priority based first on renewing companies who re-signed by the December 1, 2014 deadline. After the renewal deadline, space will be allocated in the order in which a company contracted for 2015 exhibit space. Companies looking to take advantage of the AIMExpo platform should contact an AIMExpo Account Manager toll free at 855-MCShows (855-627-4697).

Stay tuned to the AIMExpoUSA.com website and download the AIMExpo mobile app to keep up to date with the news and activities for the 2015 show. Additionally, be sure to visit AIMExpo’s social media pages. “Like” the American International Motorcycle Expo on Facebook by visiting the AIMExpo page, and “Follow” on Twitter: @AIMExpo. To receive monthly updates from AIMExpo about new features, free giveaways, interactive opportunities and new product developments, click here to subscribe to our monthly newsletter.