Carson Schubert is bringing a serious dose of marketing muscle to the RIDE Snowboards team as he takes the reins as global marketing manager. Since he was a youth, snowboarding has been engrained into Schubert’s life first strapping in at age six, and recently he was the brand and marketing manager at High Cascade Snowboard Camp. Schubert will lead and oversee all facets of RIDE’s marketing, and will work side-by-side with Sean Tedore, RIDE’s global brand director, and Tanner McCarty, RIDE’s marketing coordinator. 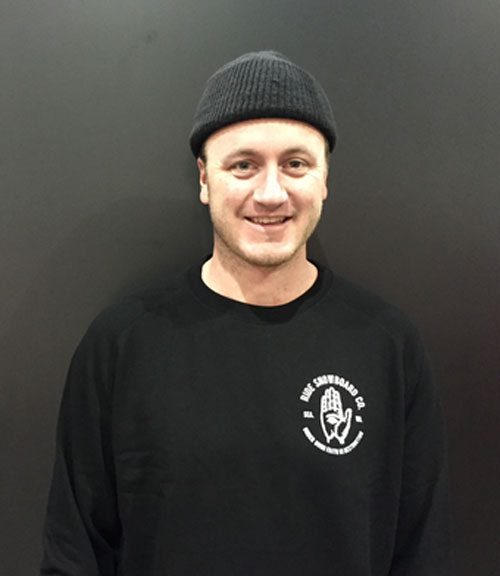 Check out the Q&A below to learn more about Schubert and what’s in store for the RIDE brand moving forward.

Q: What's the best piece of advice someone gave you? Who?

A: Never get caught starring directly into the sun. Wisdom from my dad, Mike Schubert.

Q: How long have you been snowboarding and where did you grow up riding?

A: I’ve been snowboarding since I was six or seven – so probably 20 years. I was born in Mammoth, California, and spent my first years on snow following my dad around. He was a self-proclaimed Mammoth ski legend and a great snowboarder early on. He and my mom were snowboard instructors on the weekends, so I would follow their groups around and just nerd out on snowboarding. When I turned eight, my family moved to Bend, Oregon, where I spent the next 13 years riding what I consider my home mountain, Mt. Bachelor. I know there are a lot of pretty epic places to ride around the country, but I’m hard pressed to believe that Bachelor isn’t the best place to snowboard – I mean look at the talent that comes out of there.

Q: You worked at High Cascade Snowboard Camp (HCSC) for many years. How did this influence your snowboarding and career in marketing?

A: I was always a camper as a kid and knew from early on that I wanted to work there when I was old enough. I first started as a digger back in ‘05 or ‘06, when James Jackson was running the crew with guys like Kyle Martin, Bryan Fox, Austin Smith, Curtis Ciszek, Aidan Payson, Josh Fisher and a few other great dudes. I’ll always remember having a conversation with Tom 'T-Bird' Monterosso when he told me that HCSC was the college of snowboarding and if you want to be something in snowboarding, it all starts there. Sure enough after three years as a digger and a few years of hiatus from working at camp, I came back into the mix and worked myself into a Brand Manager role. Camp is the epicenter of snowboarding, and is the best place to learn how the snowboard industry works. I worked with people from every corner of snowboarding and developed a marketing strategy that not only included marketing HCSC to campers, but also all the brands that partner with camp.

Q: What new perspective will you bring to RIDE and how do you see the brand evolving into the future?

A: RIDE is a deeply-rooted brand with people running it that align well with the core of snowboarding. Right now our primary philosophy with the brand is to remain authentic and to make decisions that make sense for snowboarding. I’ve worked in shops growing up, filmed tricks for videos, and then have since pursued having a voice that makes an impact on snowboarding. I think having seen every side of the transaction has provided me a clear sense of where the value lies in marketing, and what our brand needs to do to stand above the rest. That said, it’s the collective vision between Tedore, Tanner, and I that will push RIDE in the right direction and create something everyone wants to be a part of.

Q: What RIDE product(s) are really raising your stoke level and how is it different than anything else on the market?

A: I think overall the RIDE boards are on another level. It’s crazy to see the technology that goes into the boards, and how focused the engineers are on making a product that our Team backs.

Standouts to me are the Alter Ego, Berzerker, and Helix. The Alter Ego is unlike anything out there and is a full-on quiver killer. With the SplitTail™ you can really plan on bringing one board everywhere that works in all conditions. The new Berzerker has a shape that mimics the Alter Ego’s, and a flex pattern that is going to make it insane for riding and jumping into pow. Aside from it having my favorite graphics in the line, the Helix rides unbelievably well. I rode it in my final runs at the Dirksen Derby, and the way that thing could pump transition and hold an edge was unlike anything I’ve experienced.

Q: Tell us one thing not too many people know about you?

A: I’m secretly the artist known as Lorde.