The American International Motorcycle Expo (AIMExpo) announced today that the three lucky winners of the fan-favorite 3-Way Giveaway contest have received their new motorcycles. OEM exhibitors, Suzuki, KYMCO and Yamaha Star once again partnered with AIMExpo to offer attendees the chance to ride away on one of three all-new models.

Thousands of AIMExpo attendees entered for their chance to win a 2014 KYMCO Campagno 110 Scooter, 2014 Suzuki V-Strom 1000 ABS Adventure, or a customized 2015 Star Bolt R-Spec motorcycle, featuring the world-renowned design of Jeff Palhegyi from Jeff Palhegyi Designs (JPD). Contestants were able to enter at the show or by mail.

The winners were randomly selected following AIMExpo and took possession of their new bikes at local Central Florida dealerships. The winners were Kenneth Maves, from Deland, Florida, Gregory Hatfield, from Orlando, Florida, and Earl Evans, from Parrish, Florida. 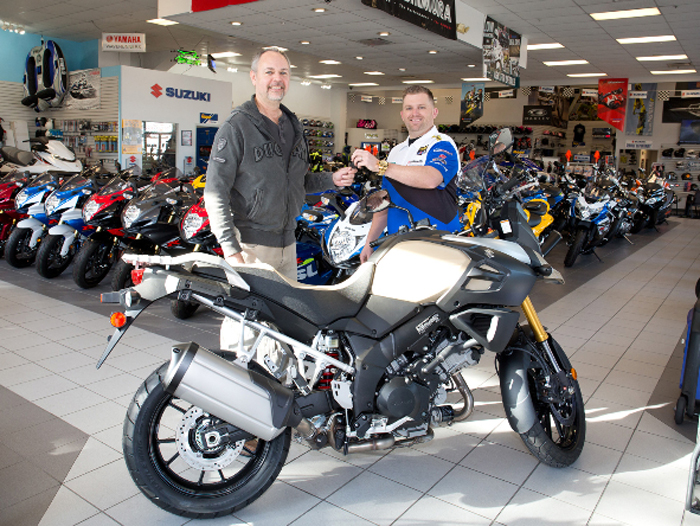 
Maves took home the Suzuki V-Strom 1000 ABS Adventure, a redesigned model that combines sporty design and handling with comfort and versatility, both on and off the road.

“I’ve gone to AIMExpo both years and am so excited to win this bike,” said Maves. “It’s got a bit of a military vibe to it and it’s very different from my other three motorcycles. I’m already planning on using this bike for my annual ride in North Carolina and look forward to exploring some of the mountain dirt roads I’ve ridden by on my other bikes.” 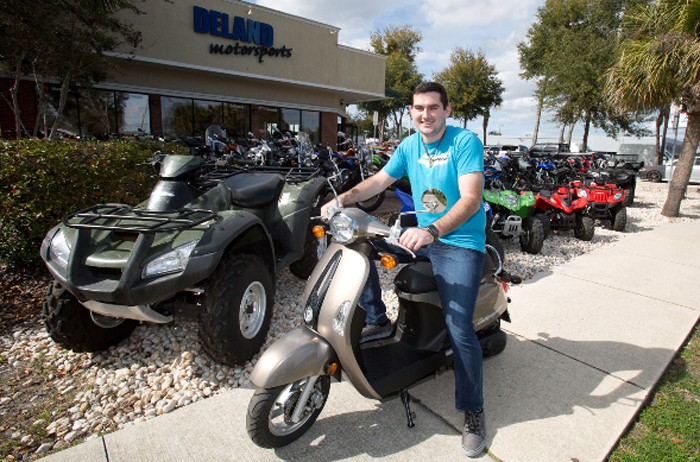 Gregory Hatfield gets ready to ride off from Deland Motorsports on his new KYMCO Campagno 110 scooter.

An excited Hatfield said, “I went to AIMExpo in 2014 with my father because I was looking forward to eventually getting a motorcycle, so I’m very happy with the scooter! I want to thank everyone at AIMExpo, KYMCO and Deland Motorsports for making this such a good memory.” 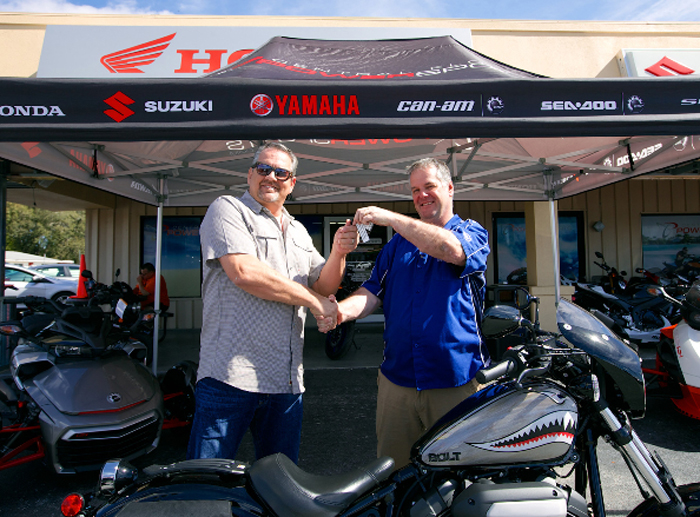 Earl Evans is presented with the keys to a custom Star Motorcycles Bolt R-Spec, courtesy of Brian Fitzpatrick at Central Florida Powersports.

Evans was the lucky recipient of the custom Star Motorcycles Bolt R-Spec. The bobber-inspired bike boasts a high level of performance and stylish aesthetics, including genuine Yamaha accessories and a custom painted gas tank, courtesy of Jeff Palhegyi Designs.

“AIMExpo is one of the most enjoyable weekends my son and I had all year,” said Evans. “When we first walked in we were like a blind dog in a butcher shop – we didn’t know where to go first! I’m really happy to receive this customized Star Bolt R-Spec. I’ve received a lot of positive feedback on the bike already and look forward to riding around town.”

Following another successful giveaway and overwhelmingly positive feedback from AIMExpo attendees, an all-new giveaway is in the works and promises to build on the excitement of the first two 3-Way Giveaways.

More than 235 exhibitors have already committed to AIMExpo in 2015. Exhibitor presence builds each day and companies looking to take advantage of the AIMExpo platform should contact an AIMExpo Account Manager toll free at 855-MCShows (855-627-4697).