The eighth annual Spyder Surf Fest will showcase the action sports industry’s most celebrated athletes, brands, fashion, music and more on Saturday, April 4 at Pier Plaza in Hermosa Beach. From 10 a.m.-7 p.m., the family festival will present the LA Surf Awards, highlight the hottest beach trends in a midday fashion show, showcase interactive booths, host autograph sessions with the industry’s finest athletes and influencers and offer giveaways and prizes. Past notable surfers who have previously attended include the legendary Tom Curren, Mark Occhilupo, Dane Reynolds, CJ Hobgood, Donovan Frankenreiter and many others.

Kicking off the weekend’s events, the highly-acclaimed comedy “Point Break Live” will debut one night only at the Hermosa Beach Playhouse on Friday, April 3 at 7 p.m. Tickets are available online at: http://pointbreakhermosa.bpt.me or in person at the Spyder Surf I shop located at 2461 Pacific Coast Hwy, Hermosa Beach Calif., 90254.  The evening, presented by Spyder Surf and the Hermosa Arts Foundation, will benefit the Hermosa Beach Historical Society. 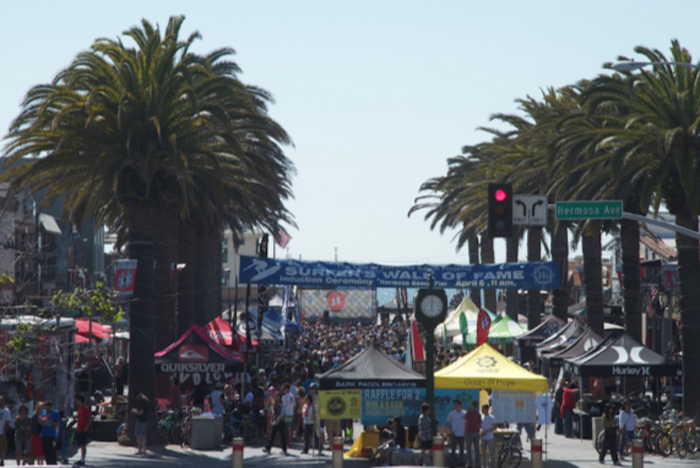 On Saturday, the City of Hermosa Beach will induct four new individuals into the “Surfers’ Walk of Fame”, including Spyder Surf founder Dennis Jarvis, along with Chris Barela, Mike Benavidez and Derek Levy. The honorees will join fellow inductees and surf legends Greg Noll, Dewey Weber, Hap Jacobs, Dale Velzy and many more. Jarvis, who will be introduced by Bob Hurley of Hurley International, will be recognized for his achievements and contributions to the surf industry at large as well as to the South Bay’s rich surf history for over three decades.

At 12 p.m., the LA Surf Awards will return to Pier Plaza to recognize individuals and brands that have had an exceptional year. Categories will include Standout Surfer, Breakout Brand, Vanguard Photographer, Breakout Surfer, Grom of the Year, California Surf Icon and more. The awards ceremony will be MC’d by Fox 11 LA’s meteorologist and avid surfer Rick Dickert, and feature guest presenters Bob Hurley, Jim Lindberg of Pennywise and South Bay pro surfer Alex Grey, among others.

“As in years past, Spyder Surf Fest is all about the industry and families getting together and having fun as we continue to celebrate surfing. The top brands in surf, skate and action sports join us to help inspire the next generation of youth and stoke them out, “said Dennis Jarvis, founder, Spyder Surf. “Spyder Surf Fest is not just about keeping action sports alive in Hermosa alone.  It’s a reminder of how much our town has contributed to the sport being one of the original birthplaces of surfing in California.”

Throughout the day, Pier Plaza will amplify the sounds of musical acts The Bixby Dicks with Derek and Mark Levy, LIFE featuring MOI from Tomorrow’s Bad Seeds, plus local favorites Kevin Sousa, Soul on Tap and Lose Control.

For more information about Spyder Surf Fest 2015, go to www.spydersurf.com.