Booker D. Surfdog, known to many as the “Kelly Slater of canines,” has followed that “hard to reach” wave out past the breaks and has created the SURF & TURF project. 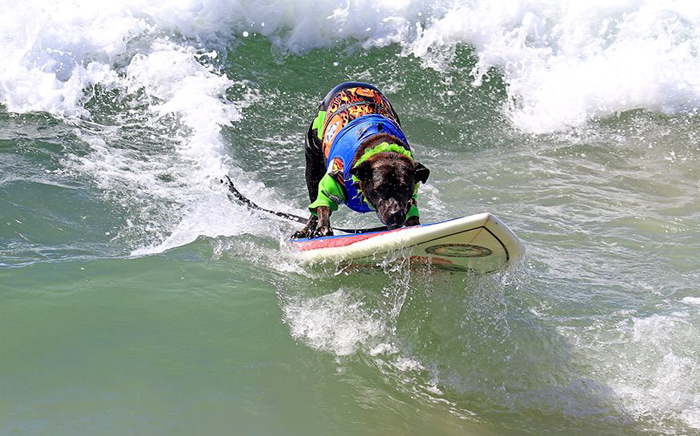 The project, which empowers rural kids from industrial or agricultural backgrounds, was created with the aim of reconnecting them with nature to counterpoint a message of technological and urban advancement.

“The surf side of this is really terrific, because we are dealing with groups of kids that may never see the ocean, even though they live in Florida,” said Pops Steinberg, Booker’s lead. “To see a dog ripping the waves up, is almost like science fiction.”

The turf component consists of reconnecting kids with the magnificence of nature, the dignity of dogs, and the metaphors of football.

“We are planning an ambitious botanical project for a heritage site, involving the plants of the Bible,” said Steinberg. “The spiritual side of nature and the Bible is fitting, so the kick off weekend happens to be a really heartfelt day with Easter and Passover coinciding.”

The first plant being highlighted is aloe vera, which according to Steinberg, “Booker D. uses on her paw pads for relief.” Booker D’s personal aide de camp also feels the kids can learn a traditional folk remedy as well. Aloe vera serves as a great relief from Florida heat waves almost as effectively as jumping in the ocean and catching a wave.

Her involvement with surfing started seemingly from the day she was born. A shoebox and a reservoir in Arizona found Booker D floating down the water and Steinberg says she’s been shredding the shoreline ever since.

With her humble roots in mind, Booker D and Steinberg are passionate about maintaining the spirit of the dog surfing community.

“Crazy or existential as it may seem, there is a pervading exploitative factor getting involved with the dog surfing world. What we see now is the commercialization of dog surfing to the extent that it is no longer based in its roots, No Kill Rescue. Dog Surfing’s very impetus is in No Kill Rescue,” says Steinberg. “Booker D. Surfdog will only surf with No Kill Rescues. There is no kill for space, or any other euphemism that can cover up the death of thousands of dogs and cats in Florida annually.”

One of the highlights of Booker’s illustrious career was collaborating with the SPCA of Brevard County, a true no-kill shelter, and finding over a dozen “FUREVER” homes over a single “surf doggin’” weekend.

Steinberg encourages families to come down to the Jupiter Beach this Easter weekend and catch a wave this Spring Break while meeting world champions Booker D and Pernell McPhee for free starting at 12:30 p.m. at Walkway #37 on April 4.