The Ride BMX NORA Cup Awards are landing back in Las Vegas with winners of BMX’s highest honor to be announced and awarded on Thursday September 17, 2015 at The Fremont Country Club in Old Town Las Vegas.

“We left Las Vegas for a couple years, but now we're back. And, after having 14 NORA Cup Awards in Sin City, it's hard not to consider it home. We've been working our asses off to make this the best NORA Cup possible, and I think with all the brands we have involved this year, the video premieres, and the all around energy of being back in Vegas...it may even be the best one ever.” -- Ryan Fudger, Ride BMX Content Director 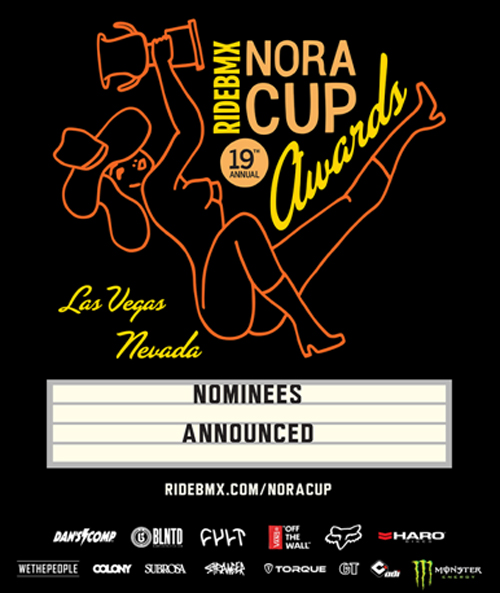 The NORA Cup Awards are determined by polling professional BMXers while the Readers' Choice was voted on by thousands of Ride BMX readers. The official nominees for this year’s awards show are (in alphabetical order):

Number One Video Part:
Broc Raiford – The Finer Things
Dan Lacey – Above Below
Nathan Williams – Above Below
Sean Ricany – No Hype
Simone Barraco – What Could Go Wrong?

Video Of The Year:
Above Below - Monster Energy
Feel My Chest Muscles I’m A Trail Builder - Credence Bikes
No Hype - Stranger
The Finer Things - Volume Bikes
What Could Go Wrong? - The Shadow Conspiracy

Congratulations to all the 2015 Ride BMX NORA Cup nominees!

Doors open at 8:00 p.m. Space is limited for the Awards; please make sure to arrive early to guarantee entry.

Be sure to stay tuned to ridebmx.com to keep up-to-date on all BMX news and information. To subscribe to TRANSWORLD Ride BMX, go online to bmx.transworld.net/subscribe.