Ethika is excited to announce the addition of five new NBA players to the Ethika Familie.  World Champion and All-Star Klay Thompson leads the team of new athletes.

In addition to Thompson, the group consists of former Rookie of the Year Michael Carter-Williams, two-time Sixth Man of the Year winner Lou Williams, Dion Waiters, and Shabazz Muhammad. “Happy to be joining my friend Ryan (Sheckler) and his company as a new addition to the Ethika Familie,” said Klay Thompson. “Ryan and I have known each other for years and he has always sent me products to try out and provide input. I love the unique style of Ethika and look forward to being a part of the success as they expand their brand.” 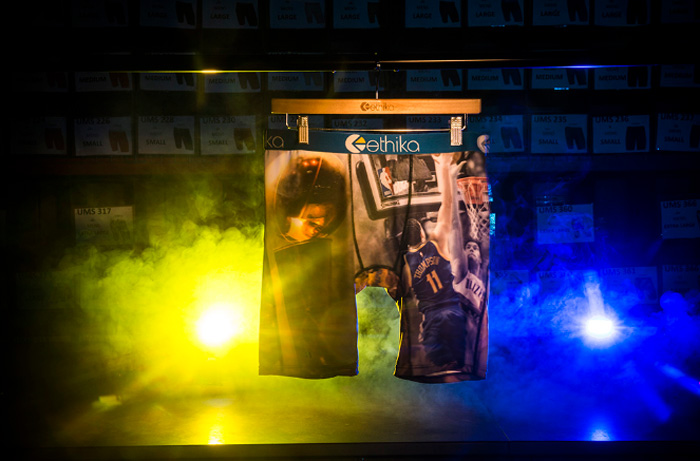 The new squad will compliment the recently released performance styles and team inspired colorways from Ethika. These new styles are available at selected Ethika retailers and can be found online at www.ethika.com.

“Ethika has come a long way this past year,” said Ethika CEO, Matt Cook. “We have always been a brand deeply rooted in Action Sports and Music – and have no intention on diverting from this focus. But as we look for ways to increase our reach and expand distribution, we realized the need to have the marketing/athlete support to not only enter, but also be successful in these markets. This is obviously an incredibly talented group of athletes who genuinely love our brand and have been wearing Ethika products for years. We tend to be pretty selective on new editions to the Ethika Familie, and this group of guys are a perfect fit.”

Ethika is focused on expressing every person’s individuality across a variety of cultures including skateboarding, motocross, bmx, snowboarding, surfing, basketball, football, music, art and fashion. More Ethika news, photos and videos can be found on Twitter (@ethika), Instagram (@ethika), and online at www.ethika.com.