The world’s best amateur skateboarders let loose at Skatepark of Tampa (SPoT) this weekend for the 22nd annual Tampa Am, now a fundamental entry-level event within the Street League Skateboarding (SLS) year-round, global program. Through three long days of intense competition in which every Am gave it their best to produce the most incredible event in its long history, 17-year-old French newcomer and Nike SB Am Aurelien Giraud emerged victorious followed by Jagger Eaton and Tanner VanVark placing second and third respectively. While last year’s winner Jagger Eaton had consistently high scoring runs throughout the competition, Aurelien Giraud stepped it up when it mattered the most with just one solid run full of every trick in the bag to get the highest score and to take first place. 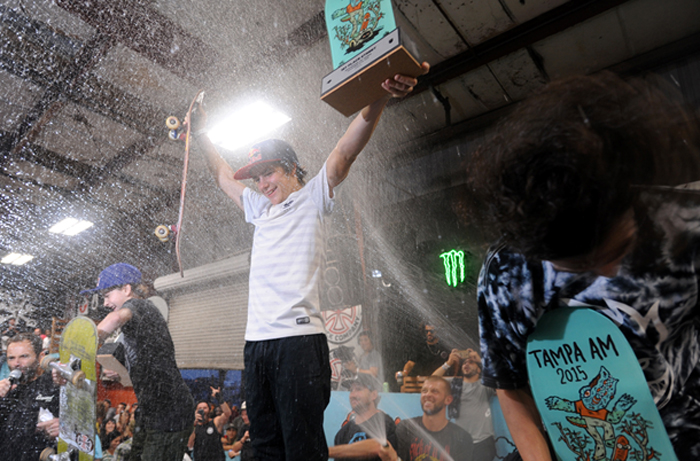 With a win at the Tampa Am traditionally being a career maker, nothing was held back this year as the 250 qualifiers unleashed their biggest and best to claim first place and, for the first time ever an invitation to compete at the 2016 SLS Pro Open. Under a new long-term partnership between SLS and SPoT, the Damn Am Select Series, Tampa Am and Tampa Pro competitions are now installed as feeder events to bring new blood into SLS. Earning his place in the League at the 2015 Tampa Pro was Brazilian Kelvin Hoefler, who through a season of incredible performances went all the way to take home the big win at the 2015 SLS Nike SB Super Crown World Championship in October. As a prime example of what can be achieved within this new amateur-to-professional framework that has been established through the incorporation of the core SPoT events, each and every skateboarder at this year’s Tampa Am event came in strong to go for broke.

Friday and Saturday saw two days of Qualifiers to trim the pack to just 30 Ams that would move ahead to Sunday’s Semi Finals where they joined the five pre-qualified winners of the 2015 Damn Am Select Series – Yoshi Tanenbaum, Josh Douglas, Wacson Mass, Dashawn Jordan and Micky Papa. When Qualifiers and Semi-Finals were finished, the Finals would come down to the top 12 of the weekend.

Webcast live on StreetLeague.com, the Finals of the 2015 Tampa Am consisted of the ten highest-scoring Semi Finalists Tanner VanVark, Jagger Eaton, Jack Olson, Axel Cruysberghs, Nate Greenwood, Aurelien Giraud, Christian Dufrene, Gabriel Fortunato, Antonio Durao, and Maurio McCoy. Joining them were Golden Ticket winners who qualified in first place on Friday and Saturday, Brazilian Lehi Leite and Tampa local, Jeremy Knibbs. With the two highest-scoring runs holding down throughout the whole contest, the highlights of the three one-minute runs per skater were:

A big congratulations to France’s Aurelien Giraud, winner of the 2015 Tampa Am, and Damn Am of the Year Yoshi Tanenbaum, who will both be appearing at the 2016 SLS Pro Open to battle for a place on the 2016 SLS roster. To see full re-airs of the contest, go to StreetLeague.com and highlights also available on SkateparkofTampa.com.