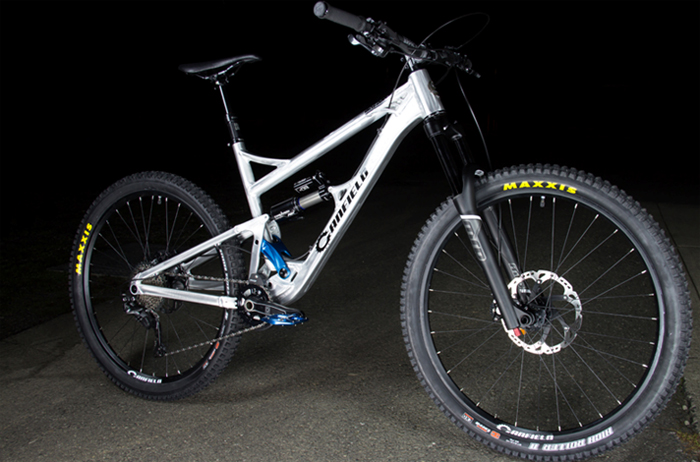 “Long before the enduro craze, we had our own idea of what an all-mountain bike should be—just as capable of flagrant disregard for line choice and taking big hits in stride as it is of getting you to the top under your own power,” said Lance Canfield, co-owner and designer.

The 2016 Balance is perhaps the purest form of that yet—an aggressive all-mountain machine that’s just as at home in the bike park as it is earning it on a backcountry epic or blazing first descents.

The Balance is built around the patented Canfield Balance Formula™ suspension, an ultra-efficient design “balancing” the suspension’s center of curvature and chainline forces within a precise radius,  resulting in virtually 100-percent anti-squat that is not sag dependent.

“What that means for the rider, is you’ll have the most efficient pedaling possible, regardless of where your sag is set,” explained Chris Canfield, co-owner and designer. “So if you like to run more sag for better downhill performance, you’re not going to be sacrificing anything on the ups. If anything, you'll have even better traction and bump compliance without unwanted pedal bob.”

When it debuted a decade ago, the original Balance was one of the first freeride rigs capable of earning its turns. The Balance was resurrected in 2014 as an efficient all-rounder, but for 2016, the all-new Balance is re-engineered with longer travel and a lower leverage ratio for more consistent, smooth travel under hard riding, and a more progressive end stroke to swallow big hits. An all-new CNCed upper link increases stiffness, while a redesigned rear triangle improves tire clearance.

“We build bikes we want to ride, and the goal for us is always fun when we point it down,” said Lance. “Of course you could certainly slay some stage races on this bike if that’s your flavor of fun.”

Combining the active CBF™ suspension with the rolling advantages of 27.5-inch (650b) wheels results in a fast, responsive ride, while handling is kept playful and confident with an aggressive 65-degree head-angle and short 16.5-inch (419-millimeter) chainstays.

The 2016 Balance is available in S, M, L and XL now at CanfieldBrothers.com in polished raw and black anodizing and ships with a Cane Creek Double Barrel Air CS for $2,099 USD. Frame, fork and component packages also available.