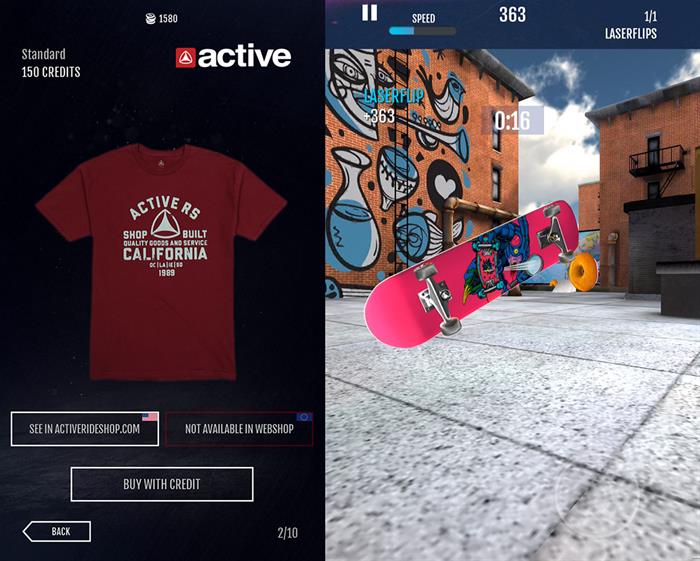 In Hoodrip Skateboarding players can explore over 30 of Brooklyn’s legendary skate spots, decorated with amazing street art from popular graffiti artists, such as Ruben Sanchez, as they work to master over 30 skateboarding tricks and endless manual, grind and trick combos. Players can first customize their custom avatar with clothes, decks, grip, wheels and trucks selected from the in-game catalogue and then compete in Story Mode or in various Challenges to earn in-game cash and street cred from the community, as well as real-world items featured in the game. Skaters can join or form crews to compete either inside their crew or in sponsored challenges. But not every challenge is skill-based, as winners are chosen at random and other times, based upon a variety of performance requirements such as points earned, speed, longest manual, donuts collected, time, etc., thus allowing all players the chance to compete and win regardless of their particular skateboarding prowess - or lack thereof.

“As skaters ourselves, our mission with Hoodrip Skateboarding was to create a top notch skateboarding game with a completely new approach to the mobile business,” said Markus Tamminen, Creative Director from ArcticPlay. “We’re excited to now launch the game and the media platform globally in cooperation with the most impressive partners you can find in the skating scene.”

The ArcticPlay team consists of skaters, ensuring that the game stays true to the distinctive style and culture of skateboarding with carefully measured in-game tricks to accurately resemble the way a skateboard behaves with an approachable, smooth arcade feel.

“As more and more of our audience shifts to mobile we're always looking for new opportunities to expand our presence there.  As one of the most authentic skateboarding games I've seen, Hoodrip Skateboarding is a perfect partner for TransWorld and a great way for us to reach more kids and skateboarders on a global scale,” Paul Kobrier, TransWorld SKATEboarding says.  “We're very excited about the opportunity and looking forward to being a part of its inevitable success.”

“It has been a pleasure working with the ArcticPlay team, who get the skateboarding culture and live it themselves,” said Brent Futagaki, VP of marketing for Active Ride Shop.  “Hoodrip is sick, and we are glad to partner with ArcticPlay as their retail partner.  They took mobile gaming to the next level by giving players the option to buy the hard goods, apparel and footwear in the game.”

“Hoodrip Skateboarding is something lots of skateboarders were waiting for. With this sick game the guys at ArcticPlay really raised the bar for mobile skateboarding. We’re thrilled to team up with ArcticPlay as their European retail partner. By skateboarders for skateboarders - this fact leaves nothing to be desired!”, Christoph Hartleib, CEO of SkateDeluxe says.