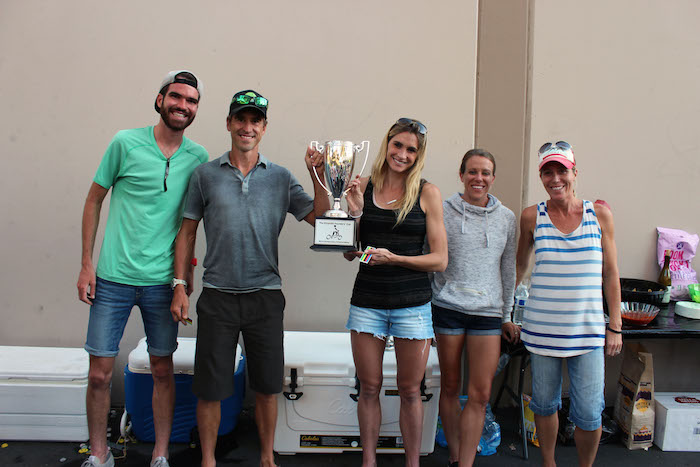 In the 7th Annual World Championships of Elliptical Cycling, which took place Saturday on Palomar Mountain outside San Diego, both the returning female and male champions defended their titles. On the men’s side, Rusty Snow continued his stranglehold on the event, cruising to his fifth straight victory in 1:10:58, just 1:03 off his course record set in 2014.

Sarah Brown powered up the 11.69-mile route, which climbs 4209 feet at an average grade of 7%, in 1:16:00, slicing more than 4 minutes off the women’s record that she set last year. She is now the fastest woman ever in the event by more than 12 minutes. In addition to reclaiming the women’s title, she had the third-fastest time overall, beating several of the elite men.

Both Brown and Snow led wire to wire. In an unexpected twist due to the staggered start where the elite women begin before the men, the two champions found themselves racing each other for the final ½ mile in an attempt to be the first to cross the finish line. As the enthusiastic crowd roared, Snow’s wheel barely edged in front of Brown’s at the wire.

“I was still a ways down the mountain when they finished, but after Sarah passed me like I was standing still, I knew it was going to be tough for Rusty to catch her. I only wish I was there to witness the sprint at the end,” said Bryan Pate, ElliptiGO co-founder and CEO, and himself a participant in the race. “At some point, we may have to start calling this the ‘Rusty Snow Invitational’ as nobody seems to be able to dethrone him. And in her first two years racing, Sarah is showing she could be as dominating in the women’s event. For her to finish third overall in a time that would have won the 2010 and 2011 championships outright is just amazing.”

Canadian Jason Warick took second place in 1:14:46, chasing down Brandon Birdsong in the latter stages of the race. Warick cut 1 minute and moved up three spots from his 2016 finish. Birdsong had a strong debut on the mountain, setting a hard early pace and holding on for third in 1:16:09.

Women’s runner-up Addie Bracy (1:45:50) had a strong showing in her first ride up Palomar. She was coming off a 12th place finish at the World Mountain Running Championships in Bulgaria., where she was the top American. After a three-year hiatus, Erin Whiting returned to the podium, claiming third place (1:50:55) for the women and becoming the lone ElliptiGO employee to finish in the top three.

ElliptiGO is the San Diego-based company that created the world’s first elliptical bicycle to deliver a fun, comfortable and effective workout experience that inspires people, improves their lives and revolutionizes fitness. Combining the best of running, cycling and the elliptical trainer, ElliptiGO bikes provide a strong cardiovascular workout that eliminates impact on joints and allows people to get out of the gym and enjoy the outdoors. Elliptical cycling is an effective way to build fitness without aggravating injuries, and it is great for everyone from the health-conscious to the elite athlete. The full line of ElliptiGO bikes is distributed through specialty running, cycling and fitness retailers nationwide, on Amazon.com and through http://www.elliptigo.com/