American Wave Machines, Inc. (AWM), announces the company is on contract for what will be one of the largest inland surfing and watersports facilities in the country at BSR Cable Park and Resort near Waco, Texas. Ranked #1 Cable Park in the US, the resort features cabins, a cable park and the BSR Super Slide - Royal Flush. AWM is teaming up with BSR to create a 2 acre surf lake incorporating PerfectSwell® Infinite Ocean™ design and surf generating technology. With PerfectSwell contract fulfillment already underway in Russia and New Jersey this will be the largest system produced by AWM to date. Plans include the addition of big cabins for accommodations, a full service surf shop, and BSR's signature bar and restaurant.

"Stuart Parsons is the right guy in the right place at the right time. What he's created at BSR is amazing, he's a visionary guy. " said Bruce McFarland, President of AWM, "This is an operating ranch. I saw more wildlife in 4 hours at BSR than I've seen in years of hiking and mountain biking. My whole team is totally stoked to work with the folks at BSR."

"I did my research and American Wave Machines came out on top. They've been installing all kinds of wave systems all over the world for the last 10 years with a 100% track record. " said Stuart Parsons, "I like that PerfectSwell can create an infinite variety of waves appealing to surfers of all levels, and no need for special pool bottom contours. My team can build this. We're ready to start digging." 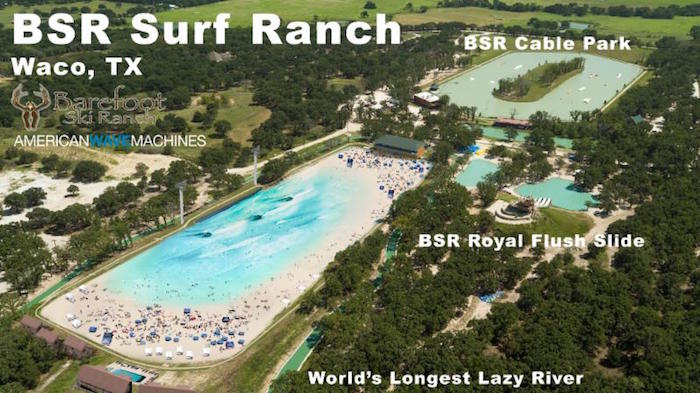 Athletes and surf teams no longer have to wait for the perfect swell to get valuable practice time. Rigorous conditioning and training can easily take place in a PerfectSwell pool since there is no waiting for waves. The first air-powered system to mimic ocean waves, AWM's PerfectSwell Reflecting Wave Generator creates circular particle motion waves like the ocean, using proprietary technology capable of producing sets of waves on demand. The PerfectSwell Phased Array Control system controls chamber firing patterns and sequences creating any wave breaking characteristic from mushy to wedging to timed aerial closeouts.

American Wave Machines is the world's leading wave pool, surf venue, and wave technology company producing authentic surf experiences. SurfStream® 5-15K square foot venues have capacity of 100's while PerfectSwell® surf pools and surf venues are 1 acre plus with capacity in the 1,000's. Since 2007 over 3,000,000 surf sessions have been enjoyed at American Wave Machines locations around the globe. For additional information, visit www.americanwavemachines.com

One of the top water facilities in the country, BSR Cable Park and Resort sits on a beautiful 500 acre high game fenced ranch near Waco, Texas. Ranked America's number 1 cable park, the facility offers 3500 feet of uninterrupted water, the worlds longest lazy river and the BSR Super Slide, Royal Flush. The facility includes a clubhouse with a multi-story deck open year round for private events, all in a beautiful setting. For additional information, visit www.bsrcablepark.com